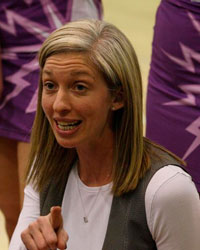 Loughborough Lightning have today announced the welcome return of former England international Olivia Murphy to the coaching team, ahead of the 2015 Netball Superleague season.

Olivia has been appointed as assistant coach working alongside former England colleague and Loughborough graduate, Karen Atkinson, who was announced as new head coach in August.

Olivia, who graduated from the University in 1998, represented Loughborough Lightning in the first Netball Superleague back in 2006 initially as team captain, before moving on to become player-coach and coach.

During a six year period, Olivia helped the franchise to become an established top-four team and played in the 2009 Superleague final in which Lightning were narrowly defeated.

“Loughborough has been a very special place for myself and Karen.  I hope we can create some more memories for everyone included in Lightning.  It’s going to take some time and hard work but I look forward to the challenge!”

Karen and Olivia are legendary figures within the sport who have been awarded the accolade of Honorary Life Members by Netball England.

Both are former England captains and Loughborough team-mates, with over 200 international caps between them and medal winners at World Championships and Commonwealth Games.

With such a wealth of playing and coaching experience, Karen and Olivia are determined to turn around Lightning’s fortunes after a disappointing 2014 Superleague campaign.

“I am extremely excited that Olivia will be joining me on the bench for the 2015 Netball Superleague season.  She has been a fantastic ambassador for Lightning over the last few years as both a player and a coach.  Her wealth of coaching knowledge will be invaluable.

“We had a fantastic playing relationship for Loughborough Students, Lightning and England and I am looking forward to developing that connection further as coaches.”

The fixtures for the 2015 Netball Superleague have been announced today with Lightning opening their season with a match against Celtic Dragons on 9th February.

Home fixtures and ticket details can be found on the Loughborough Lightning website: