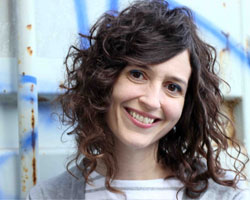 A Loughborough University academic who has developed a pioneering approach to communication skills training has been invited to speak at the annual TEDxBermuda event.

Professor Elizabeth Stokoe, Professor of Social Interaction based in the Department of Social Sciences will present her thoughts on the ‘Conversational Racetrack’ at the annual event being held on 4th October.

The presentation will discuss the daily race for people to understand each other when they speak and explain how to avoid hurdles that cause conflict.

It will be based on Professor Stokoe’s ground breaking research that has developed Conversation Analytic Role-play Method (CARM), an innovative training tool which can be adapted to a range of workplace or institutional encounters.

In contrast to traditional role-play, CARM uses audio and video recordings of real-time, actual encounters to identify conversational problems and roadblocks as well as effective practices for avoiding and resolving them.

Professor Stokoe was approached to speak at the event by the organisers after they heard her research featured on BBC Radio 4’s The Life Scientific programme last year.

“It’s a tremendous honour to be asked to present at a TED event. I’m really excited to be able to present the work that my colleagues and I do in the world-renowned Discourse and Rhetoric Group at Loughborough, to such a large and varied audience.

“We know that the TED community is very large and passionate! So I hope that, at the end of my talk, they will be as passionate as I am about the scientific study of conversation.”

TED - Technology, Entertainment and Design – has developed from an initial conference held back in 1984 into a worldwide online community for information sharing and story-telling.

The TEDx programme is a series of local events planned and coordinated independently, under licence by TED.  This will be the fifth TEDxBermuda event.

Professor Stokoe with be one of 11 international and local speakers attending the event alongside renowned explorer Oliver Steeds and film and TV star Adjoa Andoe.

Talks from TEDxBermuda will be available on the event website at: http://www.tedxbermuda.com