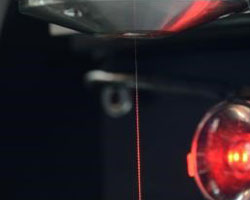 Powdered milk could taste more like the real thing in the near future thanks to a project involving a Loughborough University chemical engineer.

Dr Andy Stapley has been awarded a £274,578 grant by the European Commission to help produce better quality powdered milk by improving the spray drying process.

His three year project is part of a £5m programme called ENTHALPY* whose aim is to look at the ‘cow to carton’ process and reduce the amount of energy and water used in the production of powdered food products like milk by 60 per cent.

Dr Stapley’s project will aim to not only improve the spray drying process involved in the production of powdered milk but also the quality of the product.

He thinks a tastier powdered milk could be in the shops within five years if the major food companies invest in the technology the project uses.

Dr Stapley, senior lecturer in the Chemical Engineering department, said: “The Holy Grail is to be able to have your instant milk made from powder out of a tub.

“I bring milk to work in a flask so that I can have a cup of tea. If I could spoon in some milk powder I wouldn’t have to do that.

“But who makes tea with powdered milk? Not many people, because it doesn’t taste like fresh milk.

“And that is due to the heat treatment which has damaged the proteins.

“We will definitely be able to improve the quality. You will never get it perfect but it will be an improvement on what you get at the moment.”

Powdered milk is made by spraying milk through a nozzle into a chamber at the same time as hot air is blown in. The hot air evaporates the moisture from the droplets, leaving solid particles behind which creates the powder.

However, this is an inefficient process because conventional sprays are chaotic and produce a wide range of droplet sizes, velocities and trajectories.

This means that to dry the largest droplets, chambers have to be very large and excessive amounts of hot air are required.

Also, because the droplets of milk are different sizes, some end up being ‘over-cooked’ and some ‘under-cooked’. The result is damaged proteins - called protein denaturation - and a poor tasting milk powder.

The drying can also result in what is called the Maillard reaction, a chemical reaction between amino acids and carbohydrates that gives browned foods, like roast chicken, their desirable flavour. It’s not, however, desirable in powdered milk.

Dr Stapley intends to minimise both factors by using new piezoelectric atomisation devices (based on ink-jet printers) to ensure all the droplets are uniform, and developing an optimal drying process to reduce the energy required and improve the quality.

He said: “The idea of the atomiser is that you have streams of droplets, which are all the same size, coming down in a nice controlled fashion.

“That means you can control the drying process better, and you use just as much air as you need to dry them, so you don’t end up with over-cooked particles."

The results of the ENTHALPY project will be transferable to other industries, like coffee and laundry detergent, food, feed and pharmaceuticals.

*ENTHALPY (Enabling the drying process to save energy and water, realising process efficiency in the dairy chain) involves 19 partners from eight European countries, a subset of whom are working on the atomisation and drying processes. Other aims of the project include improving the efficiency of pre-treating the milk, cleaning the process plant using enzymes rather than chemicals, and recovering heat and water across the whole process.