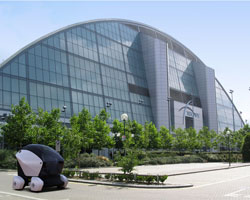 Loughborough University is set to lead a £600,000 project which will help the government in its aim to introduce a fully integrated transport system complete with driverless cars.

Loughborough, along with De Montfort, Nottingham Trent, and Coventry universities, has been awarded a contract to support the Transport System Catapult’s (TSC) work on how to move people and goods around the country in the best way possible.

The TSC, a technology and innovations centre, aims to make transport smarter through a concept called Intelligent Mobility (IM) and is spending £150m over the next five years.

The four universities have been tasked with delivering a programme that will lead to better collaboration between academia and industry in IM.

The three-year partnership between the universities is called IMPART – Intelligent Mobility Partnership – Midlands Centre of Excellence – and it will build a new collaboration between academics, business and industry to generate new products and services.

Pete Thomas, Professor of Road and Vehicle Safety at Loughborough and the academic lead of IMPART, said the transport system of the future will enable people and goods to be moved about safer, quicker, more efficiently and more sustainably than ever before.

He added: “The traveller is at the heart of the Intelligent Mobility system but we need to develop and apply new technologies in a human-centred approach to mobility. It will be a large challenge simply to develop new ways to measure the changes in mobility and the benefits to travellers.

“This unique collaboration between four universities will enable us to work with local businesses to capitalise on the advanced capabilities we have in Intelligent Mobility across the region.”

A major theme of IM is the driverless car and, while the UK trails the likes of America – Google expect to have perfected theirs by 2018 – the government is determined to catch up.

It sees the driverless car, and a fully integrated transport system, as the best way to reduce accidents, congestion, pollution and also improve fuel efficiency.

Professor Thomas said: “Driverless cars are an important area of research at Loughborough but their future success will rely on them becoming accepted by the public who will have to put their trust in the technologies.”

Mohammed Quddus, deputy leader of the IMPART team, said that about 85 per cent of traffic accidents happen due to driver error.

In addition, the delays, air pollution, noise and climate change from the current transport system, are costly to the economy. Moreover, a car is idle for about 95 per cent of the time.

He said that creating a step-change in future transport technologies to reduce these negative impacts was essential, and autonomous transport was the best way.

Mohammed, Professor of Intelligent Transport Systems in Civil and Building Engineering, said: “In future the transport system will be different, absolutely, much more autonomous. This is the way industry is heading.

“Autonomous vehicles will be more fuel efficient and there will be fewer accidents and less pollution. Achieving fully autonomous transport systems is the vision, the dream. The goal is achievable.

“The aim of the project is to work with TSC and help UK industry to grow in IM. They need academic expertise - and this partnership will provide it.”

Loughborough will lead the project and DMU will be the Outreach Champion in charge of delivering things like summer schools, annual conferences, industry workshops and knowledge transfer activities in the areas of autonomous transport systems, data modelling and simulation and end-to-end journeys.

The partners will bring together industry, academics and local authorities to discuss research and transport challenges and how these might be overcome.

The idea is to harness skills and technologies from a range of industries to produce an integrated transport system capable of seamless end-to-end journeys involving cars, public transport and air travel.

About 20 PhD students from the four universities conducting research into IM will spend time at the TSC in Milton Keynes.

The partners will seek to work with a range of local authorities on IM, including Leicester City and County councils, Nottingham City Council, Northamptonshire County Council and Coventry City Council.

The TSC aims to exploit opportunities in IM estimated to be worth up to £900 billion by 2025 and establish the UK as a world leader in transport systems, creating new technologies that can be exported.