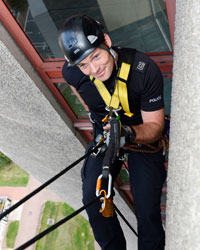 Specialist rope teams from Leicestershire Police and the Fire and Rescue Service put in some vital abseil training at Loughborough University after borrowing the tallest building on campus.

The police officers were members of the rope access team from the East Midlands Operational Support Service Tactical Support Group. The fire service trio were from the Leicestershire Fire and Rescue Service Rope Rescue Unit.

The training exercise was arranged back in 2012 when the Tactical Support Group was involved in security during Team GB’s kitting-out for the Olympics at Loughborough University.

PC Stephen Palmer, rope access supervisor, said the TSG struck up a good relationship with the Facilities Management department who invited them back for a training session.

Unfortunately, they got diverted to another job on the day they were scheduled to visit Loughborough in  2012 and this was the first chance they had had to take FM up on their offer.

PC Palmer said: “The university have been absolutely fantastic. We worked here on search and security during the Olympics and we struck up a good relationship with Facilities Management.

“The venue is fantastic. You would struggle to find anywhere this high in Leicestershire, and places willing to give us access are few and far between.

“While industrial sites are the places that are likely to need us they can’t shut down, but Loughborough University more or less shuts down during the summer.”

PC Palmer said the training session was vital for the rope access team, which does search and body recovery and even has a counter terrorist role.

PC Palmer said: “This is really important for the rope access team.

“We have seven officers and are deployable nationally, so we could find ourselves going to any rope access job at any time anywhere in the country.

“One of the problems we have is finding venues with a good amount of height.

“These are all skilled rope access operatives and they practise once a month. Getting exposure to this sort of height so they feel comfortable is crucial.

“The next job could be a power station, an oil refinery, the City of London, anywhere.

“Having this sort of exposure gives them the confidence to do the job when they are required to do it operationally.

“We work with the fire service guys from time to time. They are very supportive and have access to equipment that we don’t have.

“They are an urban search and rescue team and, again, they are a small team and they struggle to get access to high places just like us.”

James Stapleton, FM Health, Safety and Risk Manager at Loughborough, said: “Stephen approached us at the beginning of the summer to ask if we would be prepared to let Leicestershire Police use one of our buildings as a rope access training venue.

“We had already built a good relationship with Leicestershire Police in 2012, when Loughborough University hosted Team GB during their London 2012 Olympic Games preparation phase.

“We were, therefore, delighted to be able to help Stephen in his request, and allow the team to exercise their specialist skills.”