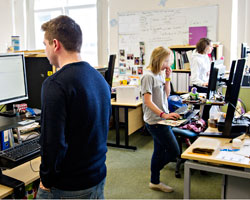 A Loughborough University academic expects workers in Leicestershire’s hospitals to feel ‘more energised and better psychologically” after using sit-stand desks during a £500,000 study.

Up to 100 sit-stand desks will be introduced for support staff in offices at three hospitals – the Infirmary, the General and Glenfield - to determine the effect they have on sedentary behaviour on NHS staff.

The study is being led by Dr Fehmidah Munir who believes the desks will have a dramatic impact on the health and well-being of those who use them because the evidence suggests sitting for eight hours a day is bad for people.

The three-year study comes at a time when sickness absence rates among NHS support staff is said to be high.

Dr Munir, Senior Lecturer in Psychology in the School of Sport, Exercise and Health Sciences (SSEHS), said: “Sitting is extremely harmful. It has been linked to a risk of diabetes, obesity, and a lot of metabolic diseases. People are sitting far too long.

“The world has changed in terms of what we do. We will sit at our desks for a long time and then go home and watch TV. So we are sitting again.

“The evidence now suggests that if you are sitting for eight, nine hours and you then do one hour of exercise, it has very little impact.

“I’m hoping to find that workers will feel much more energised because they are breaking up their bouts of sitting, and allowing the blood and oxygen to flow through the body better.

“And because they feel energised they will feel better psychologically. So their general well-being will improve.

“I’m also hoping to find that there will be less reporting of musculo-skeletal complaints, less aches and pains, and no adverse effects on work performance.”

It is being funded to the tune of £524,429 by the Department of Health and comes hot on the heels of a Loughborough-led pilot study in Bradford schools into whether sit-stand desks can help curb the UK’s obesity epidemic.

Workers will be able to raise or lower the desks depending whether they feel like standing or sitting.

Dr Munir said: “The aim of the research is to get people to break their prolonged periods of sitting and to look at ways of changing behaviour.

“And also to look at any other policy changes that are necessary, like using communal printers, and the position of waste bins, to make people get up and walk around.”

Dr Munir and her colleagues will spend the first year identifying areas where the desks can be introduced and researching people’s attitudes and behaviours in an attempt to make them receptive to the desks.

The desks will be introduced in the middle of next year and the researchers will monitor the differences in health, well- being and performance between those who use them and another group who use sitting desks.

Dr Munir believes sit-stand desks are the future and says Britain is lagging behind many countries in this area.

As an example she cited her recent visit to the National Research Centre for the Working Environment in Denmark.

She said: “Having been to Denmark and seen these desks I would say they are the way forward.

“The quality of the desks needs to be good. We also need changes in policy, behaviours, and attitudes because you could get a sit-stand desk and never stand up to use it.

“We are way behind Denmark. It was absolutely brilliant. Every office based worker had a desk that was electric, which could be raised or lowered at the press of a button.

“And they also had ergonomically designed chairs. The desks were being used and I think we need a cultural shift in attitude.

“In the canteen they had chairs that slotted into the tables. Once you had eaten you would slot the chair in so as to reduce the risk of musculo-skeletal issues among the cleaners.

“They didn’t have lifts, and there was a massive basket of fruit in the foyer so people could get one of their five a day.”