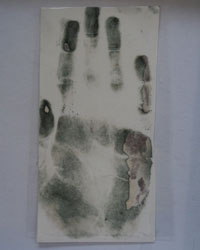 Light-fingered thieves who steal from Britain’s oldest and most treasured buildings are to be caught red-handed - and brown and black - thanks to a forensic detection system developed by Loughborough scientists.

The technique was devised by Dr Paul Kelly and his research group and is cheap, simple and, unlike some methods, non-invasive for the suspect and the results can be stored and used many days later.

Dr Kelly is hopeful that the police and the heritage sector will take advantage of a procedure which could help the fight against a crime, particularly in the form of metal theft, that is having a huge impact on Britain’s history and its economy.

While the technique is a weapon against general metal theft, Dr Kelly believes it can help the heritage sector in its fight against the thieves who target lead in church roofs and metallic plaques from war memorials.

The gelatine sheet is placed on the hands of anyone suspected of metal theft.

Because residual traces of metal are left on the skin after metal has been handled, those are transferred to the gelatine sheet.

When sprayed with the rubeanic acid, the result is a ‘map’ of whatever was held, even showing patterns or breaks in the metal.

Each metal produces a different colour. Copper comes up as black, lead as brown, after further treatment with UV, and nickel as violet, after being treated with ammonia.

The process has other advantages. The gel lift ‘results’ can be stored and developed many days later. Results can be obtained hours after the suspect touched the metal, and even after some degree of washing.

Dr Kelly, deputy head of the Chemistry department, said: “It’s up to the forensics community to decide the pros and cons and see whether it is useable or not. We are effectively saying ‘you can do this.’”

Dr Kelly came up with the technique thanks to what he calls some ‘lateral thinking’ and ‘taking a punt’ after previously working with Home Office forensic labs (who also collaborated on this study), and has had a paper on the results published by the Royal Society of Chemistry.

He says his current PhD student, Richard Wilson, has also had encouraging results from tests on things like rucksacks which carried metal, and work surfaces.

Dr Kelly believes the test has potential with regard to metal theft, saying: “The process can link an individual to a particular metal based on the colour of the handprint and the pattern of metal on the hand.

“It is highly flexible and can be used in the forensics laboratory or in situ.

“It’s non-invasive and can still generate results a significant time after contact with metal, and after light washing.

“The level of detail that can be mapped out indicates the technique has potential within heritage crime scenarios like the opportunistic theft of small, high value antique items.”

Dr Louise Grove, senior lecturer in criminology and social policy in the Social Sciences department, is also supervising Richard during his PhD and has a new book* on heritage crime out this autumn..

She said: “This is an exciting development which has huge potential in the fight against heritage crime. We desperately need innovative ideas like this to allow improved detection and prevention of offences against our heritage assets.”

Metal theft from historic buildings is so serious that every police force has run operations to target what is, in effect, an epidemic. In some cases, such as copper cable theft, this would not come under a heritage crime banner but still has huge financial implications.

Heritage assets are frequent targets. According to a 2011 survey by Loughborough and Newcastle universities and the Council for British Archaeology, there are about 75,000 crimes a year affecting historic sites, including listed buildings.