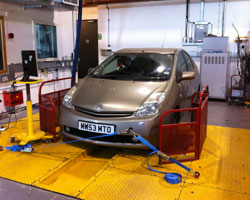 A Toyota Prius hybrid being tested on Loughborough’s chassis dynamometer.

Loughborough University is set to lead a £3.3m research project aimed at improving the technologies that will propel the next generation of low carbon vehicles.

The four year project, called ELEVATE (ELEctrochemical Vehicle Advanced TEchnology) will look to develop better materials for energy storage devices such as batteries and supercapacitors, along with better diagnostics for fuel cells.

The team of academics and researchers also aims to come up with a way of allowing the mass charging of electric vehicles without crashing the national grid.

The venture will be led by Loughborough University’s Professor Rob Thring with support from four other universities - Warwick, Oxford, Southampton and UCL.

It will draw on the expertise in the departments of Chemistry, Chemical Engineering, and Materials and Manufacturing, and also involve eight leading UK companies, including Jaguar Land Rover, Johnson Matthey and Intelligent Energy, a company founded on Loughborough University research.

Loughborough’s principal role will be to prove that the new electrochemical energy storage devices work in an existing hybrid car, which will be made available for test drives by leaders of industry, government and celebrities. They will also feed the data back to their partners and UK industry.

He said: “From a personal point of view I’m ecstatic. But more than that, it demonstrates that the British Government ‘gets it’ with regard to the future of low carbon vehicle research, development and manufacturing in the UK.

“Low carbon vehicles are an essential part of the UK’s plan to meet its 2050 CO2 objectives, and a part of the plan to cut petroleum usage.

“That includes essential research like that proposed in the ELEVATE project.”

ELEVATE is one of two new research projects designed to drive forward low carbon vehicles technologies being funded by EPSRC to the tune of £6 million.

The second is called ‘Ultra Efficient Engines and Fuels’ and is led by Dr Robert Morgan at the University of Brighton.

It will investigate how to improve the operational efficiency of internal combustion engines by as much as one third, and how new fuels performance can be used in future engines to bring emissions close to zero.

The announcement was made today by Greg Clark, the Minister for Universities, Science and Cities, as the annual Low Carbon Vehicle Event - LCV Cenex 2014 - opened at the Millbrook Proving Ground near Bedford.

Mr Clark said: “Forging strong business and academic relationships is vital to reinforcing the UK's reputation as a global leader in research and innovation.

“Funding these new projects involving eight universities is a clear example of this in practice, while taking us a step closer to producing low carbon vehicles on a mass scale.”

Professor Philip Nelson, EPSRC’s Chief Executive, said: “The UK's research base and its universities are a fantastic source of new ideas and refinements from which industry can draw to grow and innovate.

“Low carbon vehicles are, without doubt, an inevitable and very necessary next step for the automotive industries. The leading research that EPSRC supports will help to make the mass use and production of these vehicles a reality more quickly.”