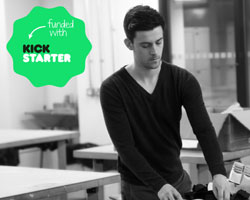 Award-winning graduate designer Simon Lyons has raised over £25,000 to take Geco Hub – his fun and colourful storage system – to market. He pitched his invention to the public on Kickstarter and attracted pledges from over 310 people in more than 25 countries.

Geco Hub is a grab-and-go organiser that looks after the important things we have a habit of losing. Interior design bloggers have praised Geco Hub’s stylish looks and versatility, and its ease of use has appealed to people with less dexterity, such as those with osteoarthritis. Geco Hub’s custom colours and no-nails fixing appeals to students and those in rented homes alike, whilst caravan owners love the way it stores things in a secure and compact way when space is at a premium.

To date, Simon has funded the development of Geco Hub solely through prize money. But going into manufacture is a considerable cost, which is why he reached out to the public for support.

“I’ve been overwhelmed to receive such a great response from so many people by crowdfunding,” said Simon. “Thanks to their invaluable support, I can now pay for the tooling that will see Geco Hub launched in Spring next year.”

Whilst Simon prepares for his first product launch, his innovation pipeline also includes Nimble, a safe and easy to use finger tool that takes the fuss out of opening awkward packaging.

Simon is supported by the Studio, Loughborough University’s graduate commercialisation hub, where he has based Version 22 – his fledgling product design business – since he graduated with first class honours in Product Design Engineering in 2013.