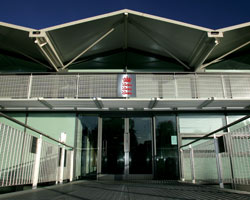 The International Cricket Council (ICC) has announced that the National Cricket Performance Centre (NCPC) at Loughborough University has been accredited as an ICC centre for testing suspected illegal bowling actions.

The NCPC is the fourth facility to be accredited for this purpose by the ICC, joining Cardiff Metropolitan University, Cricket Australia’s National Cricket Centre (Brisbane) and the Sri Ramachandra University (Chennai).

The ICC has provided its testing protocol, which includes a suite of testing equipment and software, to all four accredited centres, thereby ensuring a consistent and more accessible testing program for international and domestic bowlers across the different facilities and countries.

ECB Acting Chief Executive, Brian Havill, said: “We are absolutely delighted that the National Cricket Performance Centre at Loughborough University has been accredited by the ICC as a testing centre for suspected illegal bowling actions.

“The ECB is committed to assisting the ICC in tackling the issue of illegal bowling actions in international cricket, and it is superb news that the NCPC’s facilities, equipment and expertise through Dr Mark King and Loughborough University can be utilised for this purpose.”

In becoming an ICC-accredited testing centre, the NCPC was assessed against a range of criteria, including having an indoor space large enough to allow a player to bowl off his or her full run-up; a motion analysis system with a minimum of 12 high speed cameras capable of producing three-dimensional data; suitably qualified personnel, experienced in using such systems; and implementing the ICC testing protocol.