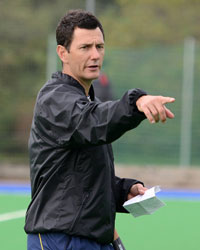 Australian international Jamie Dwyer has visited Loughborough University to work with the performance hockey squads based on campus.

Jamie is a legend of the sport, winning the FIH World Player of the Year award on five occasions.

Playing in over 320 international matches for Australia, Jamie has won every major event in the sport, including the Olympic Games in 2004 and the Hockey World Cup in 2010 and 2014.

Jamie spent a couple of days on campus to pass on his knowledge and experience about the game to the men’s and women’s squads.

“I found out about Loughborough University through the International Hockey Federation (FIH) and they explained what they were doing with the University. It’s a brilliant place - the sporting facilities are world-class and mind blowing.

“On the hockey side of things I was quite impressed with both the men’s and the women’s teams.  The intensity of the training and the quality of the skills was really good.  Hopefully I taught them a couple of things that will make them better hockey players and a better team.”

“I am delighted that Jamie agreed to visit Loughborough to provide us with his knowledge and experience that will be of great benefit to the players.

“Jamie first engaged with us at the Hockey World Cup, which we attended as at the time we had been announced by the FIH as the official Innovation Partner for the sport.

“We all gave Jamie a warm Loughborough welcome and I very much look forward to working with him in the future.”