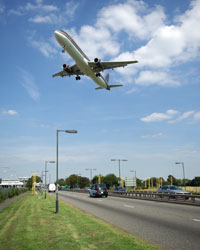 A report - Surface Connectivity: assessing the merits of the Airports - undertaken by Loughborough University for the Independent Transport Commission (ITC) is released today (Wednesday 29 October).

The report, by Dr Tim Ryley and Dr A M Zanni from the University’s School of Civil and Building Engineering is timely, since the Government’s Airports Commission will shortly publish its latest analysis and will make its final recommendations by next Summer.

The report calls for stronger focus on the surface transport implications of airport expansion, whether at Heathrow or Gatwick. Expanding an airport without a clear plan for surface access will deliver only half the solution. No-one simply flies: all airline journeys start-and-end with surface journeys to their final destination.  But this issue has attracted far too little attention.

The report therefore recommends that the Airports Commission should:

And calls on the Government to:

"Expanding an airport without an adequate surface transport strategy would deliver only half the solution.  But the surface connectivity issues have been largely absent from public debate.

The report comes at an important time for the Airports Commission, who will decide on their final recommendations in the next few months.  It is essential that, whichever airport they recommend for expansion, they don’t look at aviation in isolation.  Passengers start and end every journey on surface transport, so this also needs to be fit for purpose.  But the population is rising anyway, and there also needs to be a switch to public transport, so it is vital to ensure the cumulative demands on the surface systems can be met and that passengers can move easily and seamlessly between their surface journeys and their flights.  Improving global and domestic connectivity must go hand in hand."

This study builds upon the following previous ITC reports on UK aviation strategy: Flying into the Future (May 2013), and The optimal size of a UK hub airport (February 2014).