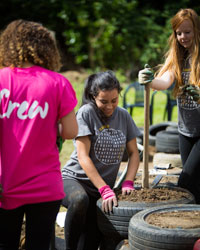 A Loughborough University academic is set to investigate the impact one of Prime Minister David Cameron’s flagship Big Society projects is having on society and young people.

Dr Sarah Mills will spend three years researching the National Citizen Service, a volunteer scheme launched in 2011 which is expected to have attracted 100,000 youngsters by the end of 2014.

The project is called ‘A rite of passage? National Citizen Service and the Geographies of Youth Citizenship', and is being funded by a prestigious Economic and Social Research Council (ESRC) Future Research Leaders award of £249,630.

Mr Cameron launched his vision for the ‘Big Society’ when the Coalition government came to power in 2010. He said it was about empowering communities, redistributing power and fostering a culture of volunteerism.

NCS, a voluntary scheme for 16 and 17-year-olds delivered through a range of charities, private sector partnerships and youth organisations, is a key plank of this vision.

It involves a series of social action projects, volunteering in the local community and a residential camp.

Dr Mills, a lecturer in the Department of Geography, says the Big Society rhetoric has waned but it is still driving policy.

She will examine the government’s motivations behind NCS, how the voluntary sector has engaged with it, and young people’s experiences of the programme.

She said: “One aim of the research is to understand why the government has placed such a big emphasis on young people volunteering through NCS.

“I’ll also be asking, ‘what do the voluntary organisations that deliver NCS think about it? What do young people actually experience, and what impact has it had on their lives?’”

The project will also follow a group of young people on their ‘journey’ through NCS and this will be portrayed in an online animated video at the end of the project.

“However the praise must go to the quality of the work undertaken by Sarah and the environment created by her colleagues.

“Dr Mills’ project is an excellent example of research which both contributes to our academic understanding of the area but has an immediate impact through exploring the lives of young people today and improving policies that shape their experiences, and those of the next generation.”