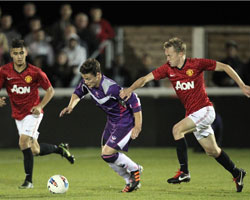 A ‘Manchester United Youth XI’ is returning to play at Loughborough University Stadium against the Students football team on Tuesday 21 October.

A United youth side played Loughborough Students two years ago, completing a 6-2 victory in front of a crowd of 1,500.

The team that played in 2012 included Mats Daehli, a senior international who played for Norway against England at Wembley earlier this year, and Jack Barmby who has been signed by Leicester City.

It will be the latest major sporting fixture to be held at the stadium, following previous visits by United, Tottenham Hotspur, Leicester City and the Barbarians rugby team.

The matches between the two teams have also been arranged in memory of Mike ‘Doc’ Holliday, Loughborough’s legendary former head coach who is credited with mentoring a number of University graduates who have gone on to progress in the world of football.

“For one of the world’s biggest football clubs to have had a level of experience on their previous visit to want to return to Loughborough University speaks volumes for our programme and all who support it.

“Everybody connected with Loughborough Students’ Football Club is extremely excited about the match and we are proud to be able to acknowledge the contribution of such a great man in Mike ‘Doc’ Holliday.”

“Two years ago I promised to return for a second Mike ‘Doc’ Holliday Challenge match. Unfortunately due to our commitments in the UEFA Youth Competition we were unable to return last season.

“I am therefore delighted to be able to bring a Manchester United Youth XI back to Loughborough in a Challenge match named after Mike Holliday who was not only a great influence on my coaching career but also a very good friend of mine.”

The match kicks off at 7.30pm at Loughborough University Stadium, and ticket prices start at £10 adults, £5 Concessions, £1 under U12’s.

More information about the match, including ticket details and a link to purchase online, are available at http://loughboroughsport.com/man-utd