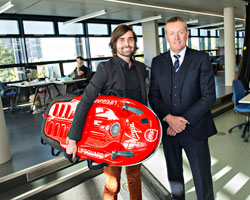 L-R Ross Kemp with Steve Perry in the Studio.

Loughborough Design School graduate Ross Kemp is celebrating a major investment that will see the worldwide launch next Spring of his sustainable solo rescue craft, Asap.

The investment news follows on from Ross’s success last week at the Great British Entrepreneur Awards and the National Association of College and University Entrepreneurs (NACUE) Varsity Pitch, where he respectively won Silver in the Start Up Award, a special Merit Award, and the Lloyds Bank Creative Industries Award. Ross was one of only seven start ups selected from over 400 to compete at the NACUE grand final.

A cheaper alternative to a jetski or small boat, Asap combines the manoeuvrability of a small paddle board with on-board electric propulsion to launch quickly and reach casualties faster. What is that? is a question Ross has often used to practice his pitch, when carrying a prototype to meetings. And in 2013, a chance meeting set Ross on the path to securing the investment that will take Asap to the point of global sales.

In 2013, David Richardson, Lloyd’s Bank and Bank of Scotland’s Regional Director and head of Manufacturing for Midlands, East and South West Commercial Banking, spotted Ross in a corridor, en route from winning the Midlands heat of the organisation’s Enterprise Awards. He suggested a meeting with Leicestershire entrepreneur and client, Steve Perry.

Twenty years after buying Creative Graphics International, which makes vinyl graphics, badging and point of sale materials for cars, planes, caravans and boats from its plants in the UK and South Africa, Steve sold the company to a London-based Private Equity Firm.

Ross went on to win the Lloyd’s Bank and Bank of Scotland’s Start Up of the Year, and Steve became one of Ross’s mentors. “I admire Ross’s tenacity and vision,” said Steve. “I bought my business aged 27 with a bank loan, but crucially it was already well established. Ross has the challenge of building his business from scratch.”

Now that the investment deal is signed, Steve is keen to continue supporting Ross, as his business develops in the Studio, the University’s graduate commercialisation hub. “Steve’s investment means I can go into manufacture, which is the most important milestone for Asap,” said Ross. “But his wealth of business experience, that will support me in the challenges ahead, is priceless,” he added.

The investment will pay for tooling and the manufacture of a fleet of rescue craft bound for Australia, Spain, South Africa and the UK. The fleet will be rigorously tested in January, including time on Necker Island – courtesy of Richard Branson, who last year flew Ross and Asap to the Australia’s Gold and Sunshine Coasts. With the final refinements in place to ensure Asap meets international rescue equipment standards, Asap will launch in March 2015, in time for Summer in Europe, followed by the Southern Hemisphere. Sales channels are in development for many of the major markets.