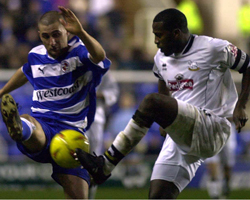 A Loughborough University academic is supporting the launch of a new pressure group that aims to address the lack of coaches from black and minority ethnic (BME) groups working for professional football clubs in England.

Dr Steven Bradbury, a lecturer in the School of Sport, Exercise and Health Sciences, will present findings from his research at the launch of the Sports People’s Think Tank, being held in Westminster today.

Despite the longstanding involvement of some BME groups as professional players, there has been only a minimal throughput of players into coaching and management positions at professional clubs.

At present only two out of 92 professional football clubs in England currently have managers from a BME background - Chris Powell at Huddersfield Town and Keith Curle at Carlisle United.

Also only 19 out of 552 senior coaching positions at all 92 professional clubs are held by coaches from BME backgrounds, 3.4% of all positions of this kind.

The findings to be presented in Westminster are taken from a wider University project which is examining the factors informing the under-representation of BME coaches in England, France and the Netherlands.

This wider research has been funded by the Football Against Racism in Europe (FARE) Network and will be presented to an invited audience of UEFA delegates in Amsterdam in December 2014.

“In the English context, the headline findings present a stark picture of the lack of BME coaches at clubs and the overwhelmingly white landscape of the professional club coaching workforce. This is especially disappointing given the longstanding contribution of BME players and their efforts to make the transition from playing to coaching in the professional game.

“Interviews with around 20 elite level BME coaches in England uncovered some strongly held perceptions of an unlevel playing field. In particular, with respect to the tendencies of key power brokers at clubs to continue to recruit coaches and managers on the basis of personal recommendation, patronage and sponsored mobility and from within the dominant white social and cultural networks of the football industry.

“Incidences of negative cultural stereotyping of aspiring BME coaches also emerged strongly from the research and this was felt to have further limited the potential for a more open and progressive approach to coach recruitment in the professional game.

“Ultimately, there was a commonly held perception that these culturally narrow approaches to coach recruitment had a detrimental impact on the professional game as a whole in ignoring the talents of a cohort of highly qualified and experienced BME coaches and in limiting their opportunities to make a positive contribution to the game.”

Former professional footballer Michael Johnson, who is now coaching at Birmingham City, is one of the founders of the Think Tank and will be in attendance at the launch.

The subject of under-representation has also raised the issue of bringing in ‘a Rooney Rule’ created in the United States by the National Football League that requires teams to interview at least one BME candidate for a head coach position, once there is a vacancy.

“With the talk of the Rooney Rule there’s people saying it’s a good idea or it’s not a good idea. But with the findings of the research conducted by Dr Bradbury and Loughborough University it now means that we have credible evidence and real live data.

“We have chewed over the recommendations and now it is fitting to launch the research and the Sports People’s Think Tank into the public domain.

“Hopefully this will be the first of many areas that we will be working on, so that we as sportspeople can look at the facts and make recommendations which will be a positive and beneficial movement for the sport.”

The report Ethnic minorities and coaching in elite level football in England: a call to action is available on the FARE Network website.

Further information about the Sports People’s Think Tank can be found on their website.