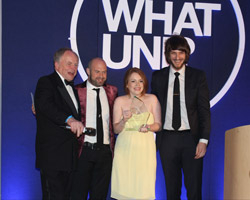 Loughborough Students’ Union has been voted the top students’ union in the country in the 2014 Whatuni Student Choice Awards.

The awards are voted for exclusively by students at UK universities and celebrate higher education institutions’ excellence in nine categories – students' union, course and lecturers, accommodation, city life, facilities, clubs and societies, international, job prospects and university of the year.

The awards ceremony was held last night (13 May) at the Waldorf Hilton Hotel London and was hosted by radio and TV presenter Clive Anderson.

As well as its top-placed ranking for the Students’ Union, Loughborough was rated second for the Union’s clubs and societies and for University’s facilities, and was third in the University of the Year poll.