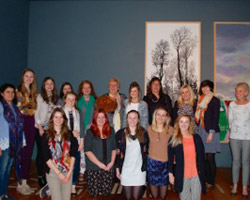 The School of Arts is celebrating after being named the Best University Textile Design School.

Students from the School picked up the award of The Designers’ Guild Plaque at the Bradford Textile Society Design Competition annual award ceremony at Salts Mill Art Gallery in Saltaire, Bradford on Tuesday (May 13).

Andrew Selby, head of the School of the Arts, said: “We are delighted to receive this award which demonstrates the huge array of talent in the School.

“Our students dominated the awards and their success will not only stand them in good stead when they choose a career but can only be good for the future success of the School.”

The School of Arts won the main award on the back of their students’ success.

They dominated one of the categories, picking up not only the three top prizes but also three of the four commendations in the ‘Clothworker’s Foundation Award, for a Woven Fabric for Mens or Womenswear, including accessories’.

School of the Arts students also won two other categories and, in total, picked up six prizes and 12 commendations.