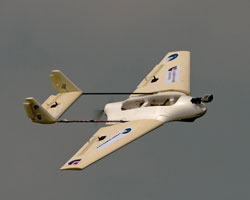 A group of Loughborough University students have devised a unique ‘swarm’ system using smart unmanned aerial vehicles (UAVs) that could be the future for mountain search and rescue.

The 13 undergraduates were challenged to design and develop a UAV capable of finding a person in a search and rescue mission for a group project as part of their final year Aeronautical MEng degree.

What they came up with was so impressive that their lecturers want a group in the next academic year to continue to develop a system which is potentially cheaper than using helicopters and quicker than rescuers on quad bikes.

It comes at a time when Amazon is talking about using ‘drones’ to deliver parcels, and a private firm, Bristow, is replacing the RAF for search and rescue missions.

Project team leader Thomas Offord believes that if those following in their footsteps can perfect a system that uses up to 10 UAVs, all working together, it could grab the interest of mountain rescue teams.

Thomas points out that it is a prototype and admits there are still hurdles to overcome which could take two or three years.

But he added: “There are a lot of universities researching this area, but nothing has been used.

“Our closest competitors are using a single UAV, none are using swarm technology.

“It would be good if Loughborough ended up being the first to take this idea and develop something.

“It’s the kind of thing that in 20 years will be commonplace. Theoretically, it’s a good system.

“We have designed it for mountain rescue but it could be used for other things, like police searches and border control.”

The swarm system uses up to 10 UAVs operating together, flying at about 50-55 mph and able to search an area of 12 square miles using GPS (global positioning system).

Each has an infra-red camera, and they can ‘talk’ to each other, so as long as one is in range of base they can all communicate with the rescue team.

The students have developed an image processing code that enables the cameras to detect human beings.

However, due to the time constraints of a seven month project, the images can only be downloaded and processed after the UAVs have returned to base. The next stage is to do this in real time.

The students used the fuselage of a Skywalker X8, made their own wings and tail, and used computational fluid dynamics, backed up by wind tunnel testing, to make sure the UAVs flew and could withstand gusts of wind up to 40mph.

They were helped by Simon Howroyd, a PhD student researching long endurance UAVs.

He said: “I was speaking to one of the supervisors and he is as keen as mustard. He thinks it is a great achievement.

“It’s very impressive stuff and there’s no reason why it should not be used one day. UAVs are already used in America for border patrols.

“A lot of search and rescue teams are charities, so anything to reduce costs is good. This would be cheaper than calling out helicopters which are expensive.

“There’s a one-off cost and then whatever it costs to re-charge the batteries.”

The students will present their project to their lecturers, peers, and the Royal Aeronautical Society, on June 10 in the Edward Herbert building.