Richard III inspires engineers of the future 21 May 2014 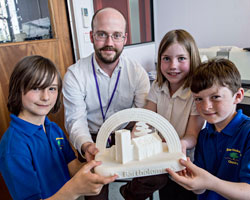 A group of schoolchildren from Quorn have been given a unique insight into engineering by the Loughborough University team behind the project to 3D print a replica skull of Richard III.

Year 3 students from St Bartholomew’s Primary School were given an exclusive tour of the University’s additive manufacturing lab where they saw first-hand the science behind 3D printing.

Pupils witnessed the full process from digital scanning and computer design to desktop and industrial 3D printing. The group was also given a sneak preview of a replica skeleton of Richard III made through 3D printing and due to be officially unveiled later this year.

To commemorate the visit, Loughborough’s engineers had manufactured a one-off 3D model inspired by drawings produced by the class. The model, which featured St Bartholomew’s Church, a tree (the school emblem) and a rainbow, also included the names of the children in the Year 3 class.

Pupils were shown how the model was designed and printed before an official presentation was made to the class and school head Judith Boston.

Professor Russ Harris, who heads up the Additive Manufacturing Research Group in the University's Wolfson School of Mechanical and Manufacturing Engineering, said:

“It's important to show engineering is about more than planes, trains and automobiles. Engineering covers such diverse areas, so impacts on many parts of our daily lives and is of interest to a wide range of people.

“This event gave us the opportunity to tap into the children’s interest in history and archaeology to introduce science and technology and showcase what engineering is about.”

“The visit was a fantastic opportunity for the children to see cutting edge technology and its many applications first hand.

“With two female engineers at the event, it was particularly inspiring for the girls who might now consider a career in engineering. The children left with a real enthusiasm for engineering.”