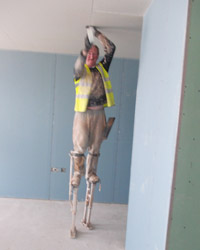 Many older workers in the construction industry fear their knowledge, know-how and tricks of the trade will be lost forever because of a shortage of apprenticeships, according to a Loughborough University researcher.

That is one of the key initial findings of a study by Design School PhD student Steph Eaves, who is conducting a three year investigation into the ageing worker on construction sites for Age UK.

Steph interviewed 80 construction workers from trades such as bricklaying, plumbing, carpentry and electrical and says one of their major concerns was the lack of apprentices.

She said: “I found that older workers have a huge amount of knowledge, experience and ideas.

“But what is happening is they are retiring and disappearing when what they would like to do is stay in the network somehow.

“Older workers are finding that no-one is coming up behind them to pass on their knowledge to.”

The sort of knowledge, said Steph, that college graduates, who are thrown straight into the job, are not getting access to.

She said, for example, that the older workers had good ideas about looking after their health and well-being. One plumber she interviewed made his own knee-pads out of foam and duct-tape because the ones provided were not good enough. And a carpenter made his own work bench because the firm’s was too low and gave him backache.

Steph said the lack of knowledge-transfer was not only damaging for the industry long term but also the workforce who were not taught how to do things properly.

She said: “Workers who have not had the benefit of an apprenticeship and working with an older, experienced worker may find they are suffering more with aches and pains as good practice isn’t passed on.

“They may also have to leave their trade sooner than planned, which will be a huge problem for the industry.”

Steph also found that many workers felt management concentrated too much on the ‘bigger picture’ and ignored the ‘little things’ which mattered to them – like hot water and toilet rolls.

She added: “One guy said to me that simple things like that put a downer on the day. He said, “This is our well-being, it feels as though we are not being looked after.”

Age UK commissioned the research in a bid to improve the health and well-being of older workers in the construction industry.

She will present her initial findings to Age UK’s Cambridge Committee in June and is about to embark on the next phase, which involves presenting them to the management at the three companies where the 80 workers are employed, and also conducting interviews with them.

She aims to produce an impact document for the industry and believes participatory ergonomics, which involves workers being able to influence work activities and health outcomes, is the way ahead.

Steph, who has a BSc in Psychology with Ergonomics from Loughborough, said: “I’ll be producing a document with initiatives and guidelines for companies on how to get their workers to participate more, the inclusion of all workers, and health and well-being in the industry.”