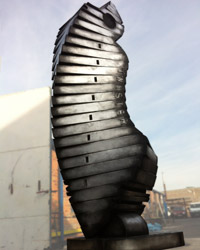 A sculpture by Loughborough University’s John Atkin will be the only UK contribution to a major new art exhibition in Lisbon, Portugal opening today (Thursday 8 May).

The exhibition was commissioned by Qu Art, a Belgium based art organisation which specialises in contemporary sculptures.  They invited artists from each of the 28 European Union counties to create works.

The artists were challenged to create interpretations of the world famous Emperor Qin’s terracotta soldiers that were discovered in Xian, China in 1974.  They were given the condition that their works should convey peace, dialogue and understanding among different nations and cultures rather than being warlike symbols.

John’s work, “Twister”, is a sculpture in aluminium.  It is derived from a garment template contour pattern and alludes to the notion of discovered archaeological identity.  He took his inspiration not only from the warriors considered to be protecting the Emperor who created them, but also the less well known acrobats that were also part of the Xian discovery and are thought to have been designed to entertain the Emperor in the afterlife.

The exhibition is being held at the National Museum of Natural History and Science in Lisbon having previously been shown at various locations in China.  From Lisbon it will be shown in European countries including France, Estonia, Italy and Holland, before finishing its tour in Brussels.

John comments: “I was delighted to be commissioned as the only UK representative for this major touring exhibition.  It is a great honour and especially rewarding to be able to pursue work linked to a great interest of mine, China. The exhibition has been received well in China and I very much hope that continues in the European leg of the tour.”

Manuel Empis de Lucena, Commissioner for the Lisbon exhibition said:  “The result of this challenge set by Qu Art is a unique series of sculptures created in different materials of unparalleled artistic diversity, each containing hints of the country of origin and its identity.”

John Atkin is a Reader from Loughborough's School of the Arts where he teachers Fine Art subjects.  He is also a leading British artist who has exhibited worldwide. He has made numerous successful working visits to China since 2003 when he contributed to the cultural arm of the Beijing Olympiad. His sculpture ‘Strange Meeting’ remains in place at the Olympic Park today. In 2012 he was awarded Honorary Fellow of the Beijing Academy of Arts by Professor Wu Wei Shan. The pair became firm friends and Professor Wu Wei Shan subsequently invited John to become an international panel member for the Nanjing Youth Olympics, where another of his works ‘The Archer’ has been selected for the cultural arm of this event in 2014.