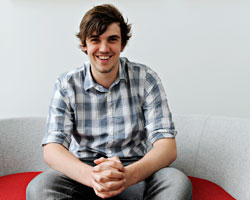 Loughborough University student, Peter Bailey (Management Sciences), has been selected as “One to Watch” by business networking website LinkedIn.

Only 15 students and graduates were chosen for this accolade as part of LinkedIn’s celebrations to mark 15 million UK members.

Darrain Faraz, LinkedIn’s Communications Manager said: “Peter shows great networking skills and demonstrates a clear understanding of the importance of LinkedIn to get ahead.”

Alongside his studies, Peter is involved in a range of enterprising activities and not-for-profit organisations.

He is a founding Project Leader with Fail Forward – which aims to change attitudes about failure by viewing it as an important part of development and success. The organisation held its successful inaugural event at Loughborough Students’ Union in March 2014, bringing together more than 60 delegates to re-evaluate their views on failure.

Peter is also a Project Leader with South Africa Challenge UK  which provides young people with life- and world-changing opportunities in South Africa as part of a two-week leadership programme and cultural exchange.

Peter has received numerous awards and accolades for his enterprising achievements.

In 2012, he was named Enactus UK Midlands Leader of the Year in recognition of his outstanding tenure as President of Enactus (formerly SIFE) Loughborough. Last year, he was selected from over 1,500 applicants to attend the Global Startup Youth conference in Malaysia.

Peter said of his recent success: “It is a great honour to have been recognised by LinkedIn. I really hope I can make the most of the platform in order to continue to engage, inspire and develop the next generation of enterprising leaders.”