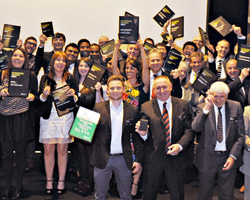 Pioneering noise reduction technology, an app to encourage healthy eating and a celebration of the UK’s thriving animation industry were amongst last night’s winners at Loughborough University’s Enterprise Awards.

Now in their fifth year, and hosted on the University’s Science and Enterprise Parks, the Enterprise Awards recognise the impact of the University’s research partnerships and its game-changing graduates. Enterprise Pro Vice Chancellor, Professor Steve Rothberg, revealed the winners which were decided by 12,500 public votes.

Professor John Mardaljevic accepted the Consultancy Award for daylight modelling expertise which has informed new standards for natural daylight inside school buildings, and is being applied to the conservation sector through the National Trust.

The Social Impact Award was won by Dr Emma Haycraft, Dr Claire Farrow and Dr Gemma Witcomb for their app to help parents to positively manage children’s eating habits. The app is widely disseminated by support groups such as Mumsnet, and the NHS.

The Cultural Impact Award was won by Professor Paul Wells and Andrew Chong of the Animation Academy whose collaborations showcase British animators including Mackinnon and Saunders (Frankenweeine, The Corpse Bride, The Fantastic Mr Fox, Bob the Builder).

Sophie Louise Hyde accepted the Graduate Enterprise Award for The Student Wordsmith, an online writing and publishing platform. Supported by The Studio and Lamplight Press, Sophie has also published You is for University, an anthology of student experiences.

Two special awards were made to conclude the celebrations:

Loughborough graduate Laurence Kemball-Cook was awarded the title of Innovation and Enterprise Fellow, in recognition of his company Pavegen, which produces flooring technology that generates off-grid energy from footfall.

Films about all the nominations and photography from the Awards are available at www.lboro.ac.uk/enterprise-awards