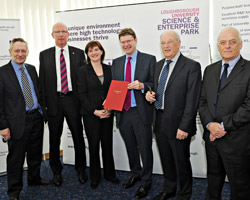 Government ministers and local authority leaders gathered at Loughborough University Science and Enterprise Park (LUSEP) on 24 March for the signing of the Leicester and Leicestershire City Deal.

The City Deal will see £16 million of Government funding invested in the region and create nearly 1500 jobs in the Leicester and Leicestershire area. LUSEP will benefit through a £2 million investment towards its expansion, which will help to provide a long term boost for the local economy and secure Loughborough’s future as a centre for knowledge-based high growth industry.

Under the City Deal scheme, certain powers are devolved from central Government to local areas, enabling them to take responsibility for decision that affect the region, decide how public money should be spent and create economic growth.

The Minister of State for Cities and Constitution, Greg Clark, and local political leaders were joined by some of the region’s key business men and women for the signing of the City Deal, which in total is destined to unlock over £130 million of investment for the area when coupled with private sector leverage and local match funding that the deal comprises.

Welcoming the invited guests to the campus, Professor Robert Allison, Vice Chancellor of the University said Loughborough was hugely supportive of the City Deal’s emphasis on young people, employability and support for business, which are vital for sustained economic growth.

“There is growing recognition of the important role that universities play in regional economies, alongside the contribution they make both nationally and internationally, and I am delighted that the Loughborough University Science and Enterprise Park is part of the City Deal,” Professor Allison commented.

"It is a fantastic achievement for Leicester and Leicestershire which will bring huge economic benefits in terms of skills development, job creation and support for local businesses. This is a significant sign of Government's confidence in the area."

The £16 million of Government funding will be allocated in the following way:

The Leicester and Leicestershire economy is currently worth £19.4 billion a year. It is central to the prosperity of the midlands, providing 435,000 jobs and hosting 32,000 trading businesses many of which are in the manufacturing and logistics sectors.

It is home to just under one million residents, with 77% of the working age population being economically active. Many businesses have plans for growth but find accessing the right type of business support and people with the right skills, a challenge.