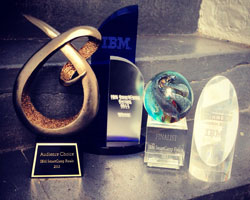 Shopa – founded in 2012 by Peter Janes (BSc Sport and Exercise Science, 2002) – is an online rewards network that provides members with cash rewards whenever they buy and share from over 150 million products.

Its members can discover popular products and earn cash when they buy or share them with friends, highlighting a step change in word-of-mouth marketing on digital platforms by offering higher cash rewards for members with large followings.

After winning both the judges and the People’s Choice Awards at the IBM SmartCamp UK finals and then the European finals in October 2013, Shopa was one of just seven finalists (from 7,000 initial companies) at the Global Start-up finals in California.

Peter said: “Winning the awards is great recognition for all the hard work the team have put in over the last year. Everyone is very excited about the future.”