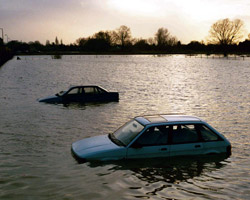 The flooding in the Somerset Levels and Thames Valley was a ‘disaster waiting to happen,’ according to a Loughborough University academic.

Dr Lee Bosher, an expert in disaster risk management, says ‘systemic organisational problems and a lack of clear responsibilities’ exacerbated the impact of the recent storms and floods.

He said his research* showed the country was simply not proactive enough and this was caused by ‘inappropriate governance, limited awareness of stakeholders' roles and an unclear allocation of responsibilities between many public and private bodies’.

Dr Bosher said the Environment Agency had been unfairly pilloried and that everyone had to shoulder some of the blame, from the government down to local authorities and even the general public.

“It was a disaster waiting to happen. We seem to be too reactive in the way we manage flood risk problems in England and Wales,” said Dr Bosher, a senior lecturer in the Water, Engineering and Development Centre (WEDC) at Loughborough.

“Sadly, we are in a situation where key stakeholders such as planners, developers, or indeed the general public, are not adequately recognised as being part of the problem, or indeed part of the solution.

“It would be unfair to single out the Environment Agency for blame. They are no more responsible than, for instance, Defra (Department for Environment, Food and Rural Affairs), private landowners, utility companies, or local authorities.

“It’s the system that is at fault. The responsibility for ownership of catchment water and service water management is very fragmented.

“There are lots of agencies involved. Is that helping us to have a joined up approach to managing it?”

“If a developer wants to build a housing development in a flood prone area on, say, the edge of Dundee, it is much harder for them to get planning consent than in England.

“A major reason for this is that if you want to build in a flood prone area the responsibility for building the flood defences is down to the local authorities, who grant the planning permission.

“So local authorities have a vested interest in not allowing people to build on flood prone areas.

“Who is responsible for flood defences in England and Wales? It is mainly the Environment Agency!

“Over the last 20 years, one in 10 new homes in England has been built on flood prone areas. I find that absolutely shocking. That’s anything between 10,000 and 17,000 new homes each year. There is something wrong with the system.”

Dr Bosher said there were a number of things that could be done with regard to ‘new build’ properties.

He suggested revisions to building codes, a tightening of planning policy, increasing awareness among the public, and improving professional training of construction professionals.

Dr Bosher believes the government should do more to consult academic experts and that an umbrella body responsible for flood risk should be formed.

He said: “The only way we will become resilient as a nation is if we have a collective responsibility and move away from the blame game.

“Something more joined up needs to be done. If there is some overview, whether it be a Commission, or a body for dealing with coastal erosion, flood risk, land draining, those sorts of issues, that might be a way forward.”

The paper can be viewed online at: