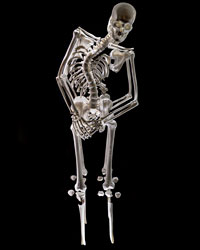 From today, visitors will be able to see a 3D printed replica of King Richard III’s skeleton, created by world-leading experts from Loughborough University, as part of the exciting new King Richard III visitor centre now open in Leicester.

The University of Leicester announced in February last year that the skeleton found in 2012 in the city by its team of archaeologists was that of Richard III, whose final resting place remained hidden for hundreds of years.

Experts from Loughborough’s School of Mechanical and Manufacturing Engineering were invited to make a replica of the king’s skeleton, using the latest 3D printing techniques.

Scans of the actual remains taken by the Leicester Royal Infirmary were sent to Loughborough, where they were transformed into a 3D computer model.  Laser sintering was then used to create a physical replica of the skeleton.  Laser sintering is a technique that uses a high power laser to fuse small particles of materials, in this case plastic, into a mass that has a three-dimensional shape.

Professor Russell Harris – head of the University’s Additive Manufacturing Research Group – who led Loughborough’s involvement in the project, said: “Generating the first 3D computer models was a very exciting moment. And later seeing the skull of Richard III emerge from the powder of the laser sintering machine in physical form was incredible.

“It was quite clear to see a number of the significant injuries that he had sustained in battle, and at last the greater story of how the King met his death can be told.  Recording various aspects of the remains, in both electronic and physical form, will be invaluable for future studies.

“Our 3D printing and additive manufacturing activities span a great number of disciplines but this was an exceptionally rewarding case to be involved in.  Working with Leicester on this incredible discovery has been a privilege, and it is great that two neighbouring universities have been able to share expertise to create a lasting legacy to Richard III.”

King Richard III was defeated at the battle of Bosworth Field in 1485. His body, stripped and despoiled, was brought to Leicester where he was buried in the church of the Franciscan Friary, known as the Grey Friars. Over time the exact whereabouts of the Grey Friars became lost.

Following extensive research by the University of Leicester, in partnership with Leicester City Council and the Richard III Society, archaeologists were able to locate the former Grey Friars site and unearth the slain King’s remains.

The new visitor centre is housed in the striking old Leicester Grammar School building at St Martin’s Place. There are two floors of exhibition space and a new covered area allowing visitors access to the original grave site in which Richard's remains were discovered in August 2012.

The exhibition has three distinct sections.

‘Dynasty’ tells the much debated story of the king’s life and times in a medieval England racked by decades of fighting in the Wars Of The Roses, detailing Richard’s rise to power as the last king from the great house of Plantagenet.

‘Death’ gives visitors the chance to learn about the key players in the Battle of Bosworth and how betrayal led to the king being cut down in the thick of battle whilst defending his crown. This remarkable turn of events saw Henry VII seize the crown and ushered in a new chapter in the English monarchy: the Tudor dynasty.

‘Discovery’ unearths the astonishing story of the archaeology, science and painstaking analysis that led to the rediscovery and identification of the long-lost remains of the king after excavating a grave beneath a car park which was the former site of the medieval friary of the Grey Friars.

The Visitor Centre is open Monday to Friday 10am-4pm and Saturday, Sunday and Bank Holidays 10am-5pm. Advanced booking is recommended.