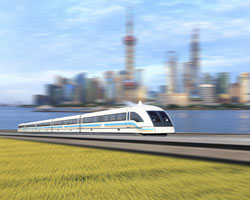 In today’s edition of The Conversation – an independent news and commentary website produced by academics and journalists – Roger Goodall, Professor of Control Systems Engineering at Loughborough University, talks about Maglev trains, which use magnets to levitate above the tracks.

First developed in the 1960s, Maglev trains are already in use in Shanghai, where the EMS Maglev Train operates regularly at 430 km/h, and in Japan, whose JR Central’s prototype EDS Maglev system can run at more than 500 km/h. And there are Maglev technologies that can push speeds up to around 600 km/h.

To achieve high-speed operation, coils are fitted to the track and these are used to create a travelling magnetic field which essentially drags the vehicles along by their magnets. With the power equipment fitted to the track, it is therefore no longer necessary to carry it on the trains, making the trains lighter and able to travel significantly faster.

But, says Professor Goodall, the reality of getting trains up to speeds over 1000km/h is not as simple as the theory, with even Maglev trains having to contend with aerodynamics. Such high speeds therefore depend upon the ability to construct and maintain a very accurately aligned guideway within a low pressure tube over hundreds of kilometres, which is where the concept becomes more difficult, and very costly.