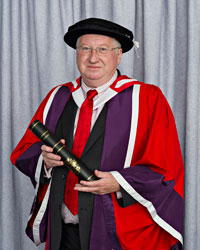 This week Loughborough is holding its summer graduation ceremonies, at which a total of ten distinguished people will receive honorary degrees.

David Collier, the Chief Executive of the ECB (England and Wales Cricket Board) and Chairman of the International Hockey Rules Board, was made an Honorary Doctor of the University, in recognition of his outstanding contribution to sport, in particular cricket and hockey.

David graduated from Loughborough with a degree in PE, Sports Science and Recreation Management, before beginning his career at Essex and Gloucestershire county cricket clubs. After a ten year spell in the computing and airline industries, he returned to sport, becoming chief executive of Leicestershire and then Nottinghamshire county cricket clubs. He was appointed chief executive of the ECB in 2004.

David is also an international class hockey referee, and held the post of chief executive of GB Hockey from 2006 to 2011 before being appointed chairman of the International Hockey Rules Board.

Air Chief Marshall Sir Stuart Peach, Vice Chief of Defence Staff in the Ministry of Defence, was awarded an Honorary Doctorate of Technology. The award was presented in recognition of his outstanding contributions to maintaining the safety and security of the people and countries of the UK, as well as the wider global area.

One of the leading figures in the UK’s armed forces, Sir Stuart's career in the Royal Air Force has taken him far and wide across the globe, with postings in Belize, Hong Kong, Kosovo and the US to name just a few.

He was appointed Vice Chief of Defence Staff in May last year.

Ian Stopps CBE received an Honorary Doctorate of Technology, in recognition of his outstanding contribution to the UK aerospace, defence and security sectors.

Since graduating with a first class degree in Mechanical Engineering from Loughborough in 1969, Ian has enjoyed a distinguished career in the aerospace and defence industries. He has held posts with major organisations in both the UK and US and is currently Chairman of Raytheon UK, a wholly owned subsidiary of the global defence and aerospace company.

He was appointed a CBE in the 2003 Queen’s Birthday Honours list, in recognition of his work in the aerospace and defence industries.

Ian has retained an active interest in Loughborough in the years since his graduation and currently serves as Chair of the School of Business and Economics’ Strategic Advisory Board.