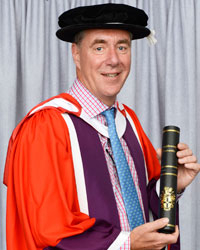 This week, each day until Friday, Loughborough University is holding its summer graduation ceremonies, at which a total of ten distinguished people will receive honorary degrees.

Twins Antony and Richard Joseph (picture above), the founders of kitchenware company Joseph Joseph Ltd, have been made Honorary Doctors of Technology, in recognition of their contribution to design innovation and business success.

Richard – an Industrial Design graduate from Loughborough University – launched the Joseph Joseph company with his brother in 2003. The award-winning business is now world famous for its innovative kitchenware and is one of the fastest growing companies in the home ware market.

Nick Smither (pictured above right), Group Vice President and Chief Information Officer of the Ford Motor Company, was made an Honorary Doctor of the University, in recognition of his outstanding contribution to information services and the automotive industry.

Nick graduated from Loughborough University in 1980 with First Class Honours in Engineering Science and Technology, and returned to Loughborough in 1986 to study for an MSc in Advanced Automotive Engineering, while he was working for Ford.

He began his career at the international motor company with a role in product development, and subsequent posts have seen him work in both the UK and US. He was appointed Chief Information Officer in 2006.