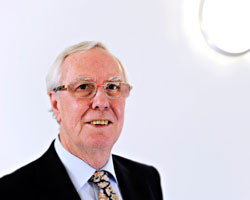 A new report – published by the think tank ResPublica and co-authored by Professor David Llewellyn from Loughborough University – has called for the immediate introduction of an oath for bankers, similar to the Hippocratic Oath, in order to raise accountability and standards in banking.

The authors of the report believe that, despite nearly five years of financial reform, the job of banking reform can best be described as half complete. They suggest this is because policy makers have pursued the wrong type of reform, focussing 'wrongly' on regulatory or prudential issues, and ignoring the crucial root cause of the banking crisis: an inherent lack of virtue amongst UK banking institutions.

In order to instil virtue and responsibility, the report states, bankers must have more personal responsibility, which the authors maintain is best promoted by developing a better sense of professionalism and ethics. Key to this is requiring all members of the banking profession to affirm a new Bankers’ Oath.

The ResPublica report, entitled ‘Virtuous Banking: Placing ethos and purpose at the heart of banking’, was launched at the Financial Times to senior bankers, regulators and politicians. Sir Richard Lambert, former editor of the FT and current Chair of the newly created Banking Standards Review Council, gave the keynote speech. He said the report was "full of brilliant ideas", "required reading for policy-makers" and included recommendations that his Council will wish to take forward in the urgent mission of increasing standards in banking.

One of three authors of the report, Professor Llewellyn – and his colleagues at Loughborough University's School of Business and Economics – has made a significant contribution to improving the standards in UK banking. Currently in his second term as Chairman of the Board of the Banking Stakeholder Group at the European Banking Authority (EBA), David has published widely in the area of financial regulation, acted as a consultant to regulatory agencies in several countries and was a Public Interest Director of the Personal Investment Authority – a predecessor of the Financial Services Authority.

Professor Llewellyn said: “Over recent years and months banking has been shocked by a series of much-publicised scandals across a wide range of areas. This has substantially eroded the image of banking and the public’s trust and confidence in the industry.

“We all know the costs involved when people are misled into buying inappropriate financial products such as Payment Protection Insurance (PPI) contracts, and banks have been required to pay massive fines and compensation for this. But just as important are the costs to consumers when they do not buy good products because of their lack of trust and confidence.

“Our central theme in the ResPublica report is that what is needed is no less than a fundamental change in the culture of banking. Amongst many specific recommendations we argue the case for bankers being required to take something akin to the medical profession’s Hippocratic Oath.”

Phillip Blond, Director, ResPublica said: “As countless scandals demonstrate, virtue is distinctly absent from our banking institutions. Britain’s bankers lack a sense of ethos and the institutions they work for lack a clearly defined social purpose. In order for us to have the banks we desperately need and the country deserves, bankers must recognise the good, do the good, and be good. The Bankers’ Oath represents a remarkable opportunity to fulfil their proper moral and economic purpose, and finally place bankers on the road to absolution.”

Other recommendations from the report include:

−      Localisation of the British Business Bank through LEPs to promote local banking.