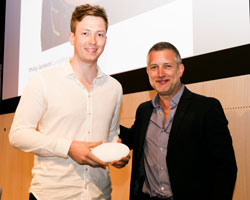 Loughborough University graduate Phillip Jackson has won a major award for his innovative redesign of a stoma bag and he is hoping to bring it to market.

Phillip, who graduated from the Design School with a first in BA Industrial Design and Technology, was honoured by the Royal Society for the encouragement of Arts, Manufactures and Commerce (RSA) during this year’s Student Design Awards.

His design of a stoma bag, which collects waste from the body after a colostomy or ileostomy operation, received the most innovative product of the year award from the RSA, and his brief in the ‘re-inventing the toilet’ category was highly commended.

To commemorate the RSA Student Design Award’s 90th year, student winners were awarded a trophy for the first time.

Phillip, 22, from Gloucestershire, is trying to get the design patented and, after more development work, he hopes to persuade a firm to produce it commercially.

He said: “I’m really pleased with it, it’s the project I’m most proud of.

“The plan is to develop it to a more commercial level and then try and sell it to a company or take it forward myself.”

Phillip received £500 and a Fellowship from the RSA, which gives him access to a network of designers and also expertise and funding which will be a boost to his future prospects.

He was then interviewed by a panel of Designers and Researchers at the RSA in London which he said ‘was quite intimidating, but a brilliant opportunity to discuss my project’.

He learned he had won the award three days later. “It was pretty insane, overwhelming,” said Phillip.

With a patent pending, Phillip is unable to go into too much detail about the stoma bag. But he said that when he started the design he wanted to take away some of the stigma attached to stoma bags and give the patient control over when the waste is released.

He said: “With current stoma bags there are a lot of functionality issues that lead to social and psychological problems.

“Bags have to be changed every two hours and the patient has no control over when the waste comes out.

“I worked with a vast number of medical professionals to try to improve the functionality of the product, which could be used to enhance the user’s interactions with their stoma care products and take away some of the stigma attached to it.

“My stoma bag gives the user more control over when to release the contents. It needs to be changed only every five or six hours.”

Phillip had three products showcased in the Design School’s Degree Show, which he also helped curate. He is currently doing freelance work while looking for a permanent job.