Good caddie can improve a golfer’s performance by 30-per-cent, according to Loughborough researcher 15 July 2014 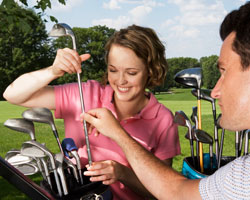 A good quality caddie relationship can improve a golfer’s performance by 30%, according to new research published today by Loughborough University.

The research, commissioned ahead of this week’s Open Championship by Open patron HSBC, identifies a clear “link between the golfer-caddie relationship and performance success” and concludes that the right caddie can make a difference of “30% or more”.

The report, titled “Understanding the Quality and Functions of the Golfer-Caddie Relationship”, also revealed that:

•    The higher the level (of golf), the stronger the relationship

•    Long-term partnerships tend to be more successful and desirable

•    Winning strengthens the bond between player and caddie

•    The 4 Cs of Closeness, Commitment, Complementarity and Co-Orientation define a quality player-caddie relationship

The research was conducted by Dr Sophia Jowett, Director of Research Degrees at Loughborough University’s School of Sport, Exercise and Health Sciences.

She said: “There is, of course, anecdotal evidence which highlights the importance of the player-caddie relationship but we wanted to scientifically evaluate the caddie contribution – I guess you could call it the ‘Caddie Factor’.

“Both caddies and golfers felt that the length of good quality relationships can aid their purpose and bring about performance success and acknowledged the best players tended to have longer relationships with their caddie.

“The 4 Cs are fundamental to a successful partnership – Closeness includes trust, appreciation and respect, Commitment is about long-term orientations, Complementarity is about responsiveness, openness and acceptance of roles, and Co-Orientation includes shared knowledge and understanding. Not surprisingly, communication is very important and most disagreements revolved around golf strategies such as club selection and shot decisions.”

Dr Jowett’s research culminated in the development of a computer software application called TANDEM, which is due to be released at the end of this year and will initially be available to coaches and athletes who wish to understand the effectiveness of their sporting partnership while identifying challenges that may be limiting their progress.

Double Open Champion Padraig Harrington is in no doubt of the value of the right caddie. The Irishman, who won the Claret Jug in 2007 and 2008, said: “It’s simple. In 2007 my caddie Ronan Flood won me The Open.

“On the Sunday I hit my tee shot in the water on 18 and was despondent, I then hit my third shot into the water again and felt like I’d lost. I had to walk about 150 yards for my next shot and Ronan was talking to me, coming out with all the clichés about what to do next – for the first 50 yards I wanted to strangle him, for the next 50 yards I started listening to him and for the last 50 yards I believed him. I was in the zone, then out of it and then back in it again – that really doesn’t happen very often.

“In that moment of time I do believe Ronan made the difference – with any other caddie I would have thought I had lost The Open but my caddie believed in me. It’s all about creating your own reality when you’re on the golf course.

“The Number One criteria is matching the personality - it’s about getting on the same wavelength and the caddie’s opinion is a moderation of your opinion. The ideal situation is that we are both thinking the same thing and we both think it should be the same club – if not, he has to say it. If you are in harmony, you know what the other guy is thinking and then everything is easy.”

HSBC Global Head of Sponsorship & Events Giles Morgan said: “The player-caddie dynamic is one of the great partnerships in sport and never is this relationship more crucial than when facing the challenge of arguably the toughest test in world golf at The Open Championship – this is where the depth of this special relationship comes to the fore.

“As a proud patron of The Open we wanted to highlight this by commissioning a new piece of research which looks a little deeper. In golf, as in business, relationships are fundamental to success and as a global banking and financial services organisation we wanted to further explore the vital ingredients of a winning team.”