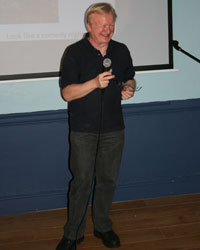 Heard the one about 13 Loughborough University academics who did stand-up comedy based on their research - and lived to tell the tale?

It’s no joke, it actually happened, and five more will risk the comedian’s worst nightmare – dying on stage – at the Organ Grinder pub in Loughborough on the night of Thursday July 10 (7pm).

They will be performing at Loughborough’s very own Bright Club, a comedy club that originated at University College London in 2009 and has since swept the country - and even sprung up in Australia.

Loughborough have staged two, the first in January, and both sold out, each with an audience of about 70.

And, whisper it, but not one of the 13 brave academics died. In fact, they went down a storm which is a comfort to one of the ‘comedians’ next up, Sven Hallin, a mature PhD student.

Sven, a member of the London-Loughborough Centre for Doctoral Training in Energy Demand Reduction, will highlight how adventurous researchers can be by talking about university holidays which, in his younger days, seemed quite, er, eventful.

Twice, he was held up at gunpoint in America, and he will use those experiences to good effect.

Sample: “I got robbed at gunpoint in Denver while working in the equivalent of McDonald’s. This guy sticks a gun in my hip and says ‘lay on the floor’.

“He was taking money out of the til and he said: “Can I ask you a question?’ I said ‘Sure, shoot’. When I got out of hospital a few days later I was fine!”

The idea of Bright Club is to promote engagement with the public and foster good relations. It has been described as a ‘thinking person’s comedy night’, and ‘where funny meets brains’.

One of the first to brave the Bright Club was Richard Jack, another Energy Demand Reduction PhD student, who insists there is comedy in academic research.

“If you do research for three years and nothing funny happened you’d feel like killing yourself!,” he laughed.

“Looking at research from an outside perspective it’s bizarrely and hilariously detailed, looking at some new widget or something. I think it breeds comedy very well.”

To prove his point he said Carolyn Webb, who appeared at the last event, talked about artificial sports surfaces. To recreate the effect of people walking on one, and therefore ageing it, she ‘spends her time in the lab stroking it.’

Kate Simpson, who helped get the club up and running, admits it’s scary but says: “It’s good to do things that are scary and nobody has yet died on stage! After attempting comedy, a regular presentation will never be scary again.

“Academia can be very serious and I think it helps make us seem more human and approachable to the public. Builders have told me the best way to engage with the public is in the pub!”

Vicki Tink is the other key organiser and has done most of the comedian recruitment. Previous ‘comedians’ have mostly been PhD students but the organisers are trying to get more lecturers and professors involved. As word spreads they also hope to get more members of the public joining university people at the gigs.

Proceeds from the third Bright Club event will go to a charity called Engineers Without Borders (EWB), who sponsor placements and education for new engineers to empower them to tackle barriers to human development.

Nicola Greene, who is also performing at the next Bright Club event, is spending a year in Blantyre, Malawi with EWB, and in a bid to raise £1,500 Nicola and Richard are doing a sponsored bike ride to Blantyre in Scotland, birthplace of the famous explorer David Livingstone.

Donations can be made on the night or online at: mydonate.bt.com/fundraisers/sanitation4all.

Richard said: “We’re riding 1mm for every person in the world without access to a toilet. That’s 1,000 kilometres for one billion people!”