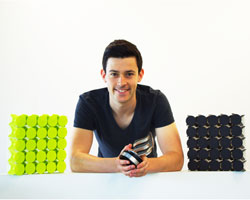 Simon, who graduated from Loughborough with first-class honours in 2013, follows in the footsteps of Ross Kemp (Asap Water Crafts) and Laurence Kemball Cook (Pavegen), who respectively won third and first place in 2013 and 2012.

Simon pitched Version 22 – which is supported by the Studio, Loughborough’s graduate commercialisation hub – to a panel of judges at Santander UK’s headquarters in London’s Triton Square. Santander UK’s CEO, Ana Botin, presented him with the top undergraduate prize of £5,000. Simon will use the funds to support the manufacture of Geco Hub, an innovative storage system that can be installed anywhere in minutes, without screw fixings.

Geco Hub is a unique and stylish way to look after the everyday items we often lose. According to a national survey1, we spend ten minutes every day rummaging for up to nine lost things, with mobile phones, car keys and important paperwork being the most common.

Simon began work on Geco Hub as part of his degree at Loughborough and has won a number of accolades including success in the Royal Academy of Engineering’s Innovation Hothouse Competition, a Shell LIVEwire Grand Ideas Award, a James Dyson Foundation Bursary, as well as the University’s Think BIG! Business Plan Competition.

The Santander Award comes at a very exciting time for Simon, who will launch a Kickstarter campaign for Geco Hub on 29 July.

"I am so pleased to be recognised through the Santander Universities Entrepreneurship Awards,” said Simon. “Getting such a great reaction from the judges has inspired me to drive my business forward by pursuing key markets for Geco Hub and the other products I am developing.”

Professor Steve Rothberg, Loughborough’s Pro Vice Chancellor (Enterprise) said: “Simon is an outstanding ambassador for graduate enterprise. We’re delighted to have been able to support his business in its early stages through the Studio and he fully deserves the tremendous success that he has achieved. I look forward to Version 22 being a household name.”