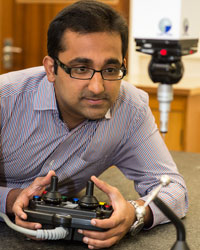 A Loughborough University researcher has developed a computer software system that can be used in quality control in virtually any industry - from car and aerospace to beauty treatments.

Mitul Tailor’s computer algorithm can detect surface irregularities as small as 10 micrometres (one micrometre = one millionth of a metre) in any component and even tell whether an anti-ageing cream is working.

It works by scanning a component in 3D. The acquired 3D information is provided to the algorithm to identify and quantify a suspicious region’s faults, and can not only tell the inspectors the size of them on the surface but also the depth, area and volume.

Mitul, a Research Associate in the Mechatronics Research Group, developed the algorithm while doing his PhD and says it is almost ready to be adopted by industry.

Mitul, 27, from India, believes the system will make components safer because it is objective and always gives the same result.

He said: “My research is all about looking at the small features on the critical components, especially in the aerospace and automotive industries.

“The system takes the subjectivity out of quality control and spots faults the naked eye would miss which may lead to a fatal accident at a later stage.

“At the moment an inspector will look at a component and make a judgement based on their experience. One person may say ‘it’s okay’, another may say ‘it’s not okay’.

“It’s highly subjective, there is no benchmark, no standard. That’s why I came up with this solution. The algorithm can detect the feature and quantifies its geometrical parameters such as length, depth, area and volume, automatically.

“And it can be used in any software for any industry. It is the intelligent part of the software.”

In the beauty industry, an expert would be able to tell whether an anti-ageing cream had had any effect by scanning a face before and after its use. The algorithm could also be used by the car insurance industry.

Mitul presented his research to politicians and a panel of expert judges at the House of Commons as part of SET for Britain.

The aim of SET for Britain is to encourage, support and promote Britain's early-stage and early-career research scientists, engineers, technologists and mathematicians who are the ‘engine-room’ of continued progress in and development of UK research and R&D.

Mitul said: “It means a lot to me, it’s a dream come true that my work was recognised by the House of Commons. Not many people get the opportunity to go to Parliament. It’s something I will cherish for my entire life.”

Professor Robert Parkin, Dean of the Wolfson School of Mechanical and Manufacturing Engineering, said:  “As one of his supervisory team, I have found Mitul Tailor to be an excellent researcher.

“He has innovative ideas with a strong benefit to industry and is currently in high demand for his skills.”