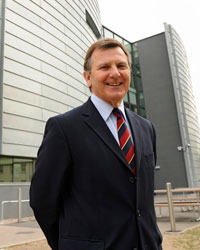 Loughborough professor Clyde Williams has been named in the Science Council’s list of the UK’s 100 leading practising scientists.

Professor Williams, an emeritus professor in the School of Sport, Exercise and Health Sciences (SSEHS), was named within the Council’s developer/translational scientist category and was recognised for developing sport science in higher education.

He has been at the forefront of the development of sports science at Loughborough University since joining in 1978. He established Loughborough’s Sports Science Research Group and in 1986 he became the UK’s first ever Chair in Sports Science.

Chief executive of the Science Council, Diana Garnham, said: “It is vital that this narrow vision is challenged urgently because it is inhibiting education policy, the career ambitions of young people and investment in developing the skills we need to deliver a world class economy.”

David Willetts, Minister for Universities and Science said:  "This list highlights the different types of skills and challenges a career in science involves. If we want more people to enter a career in science we need to show that the scientific community is not some exclusive club but people with a wide variety of vocations and interests who have rewarding careers and are making a significant contribution to the wealth and well-being of the UK."