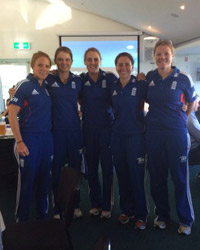 Current Loughborough MCCU players have played their part in helping the England cricket team retain the Women’s Ashes in Australia.

The win gave England an unassailable 10-4 lead in the multi-format event.

Victory in the Test Match, worth six points, and in the first One-Day International (ODI) had given England a strong advantage over the hosts.

Australia rallied to win the second and third ODI’s to put them back in contention, and take the match score to 8-4.

But a composed performance in the T20 match in Hobart gave England the win, and two crucial points to retain the Women’s Ashes.

“I’m unbelievably proud.  This is a pivotal moment in their careers. To win the Ashes on home turf in the summer, then to go to Australia in a completely new environment for some of them and to play the quality of cricket they’ve played. They are overjoyed!

“Nat has only been in the England setup for a couple of years, but has now cemented her place. She will be a world class performer for a very long time. Anya leads from the front all of the time. She has taken wickets, bowled quick and got through 30 overs in a Test Match.

“Although Anya and Nat have played in the most matches Lauren, Georgia and Amy also need to take the credit as well for all the hard work they have done. They are important squad members and are next in line to play a significant role for the team.”

Following the Ashes tour the players will begin preparation for the 2014 ICC Women's World Twenty20 tournament being held in Bangladesh which starts in March.