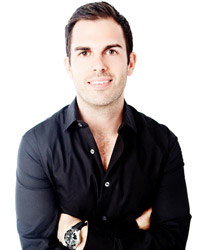 A Loughborough graduate is behind the only start up in the UK to reach the SmartCamp Global Finals to compete for the title of IBM Global Startup of the Year. Peter Janes (BSc Sport and Exercise Science, 2002) launched Shopa in August 2012, having previously built and sold The Post Network, a content distribution platform with fellow Loughborough graduates Paul Stewart and Charlie Cooper.

Shopa is a rewards network that provides members with cash rewards whenever they buy and share from over 150 million products. Its members can discover popular products and earn cash when they buy or share them with friends. The solution highlights a step change in word-of-mouth marketing on digital platforms and offers higher cash rewards for members with large followings.

After winning both the judges and the People’s Choice Awards at the IBM SmartCamp UK finals and then the European finals in October 2013, Shopa is now representing Europe at the Global Start-up finals in California. Shopa joins the seven other finalists (from 7,000 initial companies) from around the world, representing Latin America, North America, Eastern Europe, Israel, Australia and Southeast Asia.

Peter Janes, Chief Executive of Shopa, said: “It’s an honour to have won over not only the judges, to become the European finalist, but also the audience, to win the People’s Choice Award. This is an invaluable opportunity to expand Shopa’s collaboration with IBM and its network of partners and experts. We’re now gearing up to put our all into the IBM SmartCamp Global Finals.”

Professor Steve Rothberg, Pro Vice Chancellor for Enterprise at Loughborough University said: "I congratulate Peter on his achievements which reinforce our strong tradition of student and graduate enterprise. I wish him the very best of luck in the IBM SmartCamp Global Finals.”