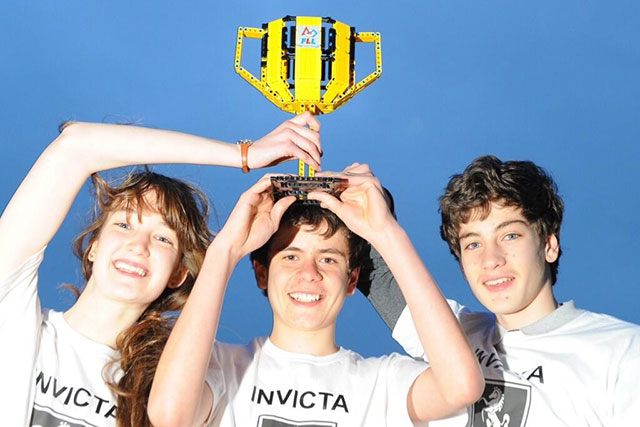 Three teenagers from Simon Langton Grammar School in Canterbury will represent the UK at the World Lego Festival in America after winning the National Final of the FIRST LEGO League (FLL) at Loughborough University.

Oli English, Emma English and Carlos Purchase-Galarza, who made up the Invicta team, beat off competition from 29 other teams at the event organised by the Institution of Engineering and Technology to be crowned UK champions.

One of the winning team, 14-year-old Carlos said: “I thought the final was fun, enjoyable and well-organised. Last year we went to Germany (for the European Championships) so it will be interesting to see how the competition was different.”

Carlos’s father, John Purchase, said: “The team were elated to win – they are now bubbling with ideas to raise money for the trip to America, and to push the project and the robots further.”

The final was hosted by the EPSRC Centre for Innovative Manufacturing in Intelligent Automation at the David Wallace building. Support was provided by the university’s Student Outreach and Recruitment (SOAR) team.

Professor Mike Jackson, the EPSRC Centre Director said: “The FIRST LEGO League Challenge is a fantastic opportunity for young people to get involved in STEM while also learning important life skills and generally having a lot of fun. We believe that this rich and memorable experience can have a lifelong impact, building skills and confidence while encouraging young people to find joy in engineering and help them become the innovators of tomorrow.  We are proud to host the FIRST LEGO League UK National Final and wish FLL continuing success.”

This year’s competition – entitled ‘Nature’s Fury’ – challenged teams from across the UK and Ireland to find a solution to tackle the effects of natural disasters. Invicta invented a hi-tech wristband for those affected by earthquakes. It was designed to help rescue workers find people trapped under rubble using radio waves.

Each team was also tasked with building a LEGO MINDSTORMS robot that could undertake a number of small tasks, like lifting a small house, or moving pets and people to safety.

Ahmed Kotb, IET Project Manager for FLL, said: “All of the teams worked really hard in the run up to the tournament and we saw some impressive designs and robotics on the day. Team Invicta particularly wowed the judges with their innovative project, core values and well-designed robot.”

Each team, made up of nine to 16 year olds, were tasked with designing and programming a LEGO MINDSTORMS robot. The robot had to then solve a range of problems and tasks. Teams were judged on their ability to build and programme the robot, their presentation and research skills and how well they cooperated with each other and their competitors.

Each school had eight to 10 weeks to prepare for the regional events, with 24 regional tournaments taking place across the country since last November.

Expectations are high for this year’s finalists, after last year’s UK winners – Untitled-1 – triumphed in America and were crowned the FIRST LEGO League World Champions. It was the first time a UK & Ireland team have won the World Festival.

The Institution of Engineering and Technology is the operating partner of FIRST LEGO League in the UK, as part of the Institution’s aim to introduce young people to the excitement of science, technology and engineering.