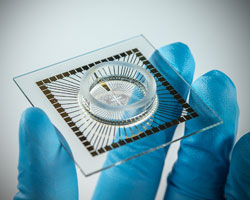 A potential application of a transparent conducting oxide thin-film in a micro electrode array used to analyse living cells. Picture from Loughborough University

Loughborough University is set to be involved in major projects aimed at helping British manufacturers find safer, more sustainable alternatives to raw materials that are rare, expensive and difficult to source.

The Engineering and Physical Sciences Research Council (EPSRC) have given £10.3 million worth of grants to four universities for research that will benefit industries like energy, automotive, aerospace, and construction.

Loughborough will be a partner in two projects worth £4.3 million.

Researchers will replace expensive and scarce tin and indium with titanium, aluminium and zinc. TCO’s are used in window coatings, solar power panels, smart phones, flat screen displays and computers, and for devices such as micro electrode arrays. Micro electrode arrays are devices used in drug discovery, and research into cell biology and function.

Paul Conway, Professor of Manufacturing Processes and Director of the Innovative Electronics Manufacturing Research Centre (EPSRC), is Loughborough’s lead co-investigator on the project.

Professor Conway, from the School of Mechanical and Manufacturing Engineering, said: “This project sees UCL’s chemistry and chemical engineering expertise deriving novel materials formulations linked to a strong Loughborough based team who are developing a range of novel manufacturing processes.

“The synergy of this partnership has the potential to make significant impacts on the availability and cost reductions we need to see for these materials for the many industrial applications that rely on them, both now and into the future.”

Loughborough will also work on a £2 million project led by the University of Bristol, which will develop new active materials for photovoltaic solar cells based on abundant and low cost elements.

The research is aimed at replacing rare elements such as gallium, indium, and tellurium, while implementing processes compatible with large-scale manufacturing.

Michael Walls, Professor of Photovoltaics in the School of Electronic, Electrical and Systems Engineering, is one of the Loughborough researchers involved in the project.

He said: “We are very pleased to be contributing to this important project. The work is aimed at developing new solar energy materials using elements that are abundant and cheap.

“If we are successful, these new photovoltaic materials could be produced in continuous and large volume manufacturing on steel sheet. The steel would then be used on cladding on large warehouse roofs. This would add value to the steel sheet and produce lots of power for the buildings and the grid.”

A third project, worth £3 million and led by the University of Surrey, aims to synthesise and process alternative thermoelectric and piezoelectric materials used in functional devices including sensors, actuators and energy harvesters.

Sensors and actuators are used in motion detectors, fuel injectors, engine sensors and medical diagnostic tools. The UK sensors market is worth an estimated £3 billion.

And the fourth, also worth £3 million and led by the University of York, will investigate waste biomass and waste CO2 to replace petrochemical feedstocks in the manufacture of polymers.

For example, food waste or wood shavings could be turned into home insulation or engineering materials for house construction. The research will aim to develop processes which will reduce greenhouse gas emissions by at least 50 per cent, at no extra cost to production.

Minister for Universities and Science, David Willetts, said: “As one of the eight great technologies of the future, Advanced Materials will ensure safer and more sustainable development of resources to boost the capability of UK manufacturing. This investment in research will help keep the UK ahead in the global race for exciting manufacturing innovations.”

David Delpy, Chief Executive of the Engineering and Physical Sciences Research Council (EPSRC), said:  “Through the development and deployment of improved materials, processes and products that will come from this research, UK industries will be able to create wealth and new jobs, whilst at the same time tackling the societal and environmental challenges that resulted from the use of the original materials which were often rare and difficult to refine.”