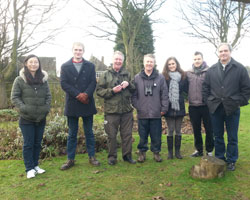 It was a case of eyes to the skies when Loughborough University students and staff teamed up to take part in the Royal Society For the Protection of Birds’ (RSPB) annual ‘Big Garden Birdwatch.’

Despite leaden skies, the rain held off and volunteers paired off and took up observation posts the length of the 1.5 mile campus, having been given some bird spotting tips by keen birdwatcher and long-serving employee, Michael Hibberd.

Things got off to a promising start when a sparrowhawk became the first species to be recorded just as the group was about to disperse. Sparrowhawks are often glimpsed only fleetingly as they scan thickets and hedgerows and swoop down on unsuspecting prey, which can be anything from tiny wrens and robins to plump feral and wood pigeons.

Hibberd said: “We know sparrowhawks have been nesting on campus in recent years and, with a healthy supply of food on hand, particularly an increasing pigeon population, it makes for an ideal home.”

The sighting of this small bird of prey was unusual in that it landed two metres away.  Hibberd added: “In all my years bird watching, I have never known a sparrowhawk to land so up close and personal to people. It was quite remarkable really.”

Over the course of the hour-long exercise 222 birds and 32 different species were recorded, representing many of the different categories of native birds and some winter visitors.

A Spanish student, Paula Cosar, said: “I'm doing a PhD in Civil and Building Engineering and one aspect of that is to be aware of the consequences of our current lifestyle in regard to pollution and decreasing biodiversity.

“I came along to look and learn as, increasingly, new buildings, systems and energy resources need to go hand in hand with our environment, respecting the local biodiversity.

Perhaps the find of the day, sighted by Hibberd in the heart of campus, was a solitary little egret. These members of the heron family first arrived in significant numbers in the UK in 1989 and settled on the south coast before slowly making their ways northwards.

Stan Palmer, a university gardener said: “Working around the campus day in, day out, we see a lot of wildlife, from deer and foxes to many different birds. A pair of little egrets first arrived on campus about a month ago and, hopefully, they’ll stick around for a while yet. It's great to see them here.”

Some species were notable by their absence. There were with no wrens, or starlings, only one song thrush, three dunnocks (hedge sparrows) and just a handful of house sparrows.  This reflects national trends where some populations of once common birds have plummeted to alarming levels.

Event organiser Patrick Whelband said: “We had a pretty good day, as even this little exercise clearly demonstrates we have many different types of birds in residence supported by a mosaic of habitats. It's all very encouraging from a biodiversity standpoint.”

The ever-popular Big Garden Birdwatch survey, which took place on January 25-26, attracted more than half a million volunteers nationwide.

It provides the charity with valuable research into the health of bird populations up and down the country. It was initiated in 1979 by Peter Holden (MBE) who, last month, gave a lecture to the local RSPB group on the Loughborough campus.