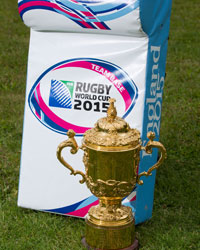 England Rugby 2015, the Organising Committee for Rugby World Cup 2015 (RWC 2015), has announced the approved list of 41 Team Bases that will host the 20 participating teams during the Tournament, taking place in England and in Cardiff between September 18 and October 31 2015.

Loughborough University will be a Team Base for Namibia and Tonga at Rugby World Cup 2015. The University will also be hosting a play-off winner to be confirmed in October.

A Rugby World Cup 2015 Team Base will consist of an outdoor pitch, indoor training facility, a swimming pool, gym and hotel and will be utilised by the competing teams in the lead up to and during the six week event.

The facilities must meet international team training standards and be located on one site or within close proximity of one another. Match venue locations have also been taken into account as part of the selection programme.

The search for Team Bases was launched via an open tender process in May 2013 and over 90 bids from across the country and in Wales were received.

Loughborough University has worked closely with England Rugby 2015 over the past 12 months to facilitate detailed site visits and liaison with the teams prior to confirmation of its status as an official Team Base for Rugby World Cup 2015.

With Loughborough University based in Leicestershire this gives the county further opportunity to be part of the world’s third largest sporting event and celebration of rugby next year.

A mix of rugby and football clubs, schools, colleges, universities and dedicated training facilities will be utilised by the 20 teams, taking the reach of the Tournament even further.

“I am delighted that Loughborough University has been selected as an official Team Base for Rugby World Cup 2015, and that we will host some of the teams who will be playing matches in the Midlands region.

“We have built our reputation on sporting excellence and have vast experience of hosting elite teams that have competed at global sporting events.

“Therefore we look forward to welcoming teams onto our campus and supporting their preparations for the Tournament.”

“As the organising committee for Rugby World Cup 2015 we are committed to ensuring that all participating teams have the optimum training environments available to them throughout the Tournament and in this regard we are delighted to announce our 41 official Team Bases for the event. Rugby, rightly, is at the heart of all our planning and we have worked closely with the teams to ensure that they have access to facilities and a Team Base that meet their individual needs.

“I would like to thank all those who have been part of the Team Base selection process and we are lucky to have some fantastic facilities right across the country.  With a wide range of excellent facilities and locations secured the teams can be assured of having all their training needs met whilst allowing us to spread the reach of the Tournament even further throughout England and in Wales.”