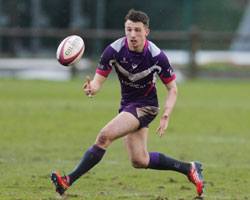 The 21 year old back has signed his first professional rugby contract after been selected to play for England in the FIRA-AER European Grand Prix Series in Lyon this month.

“Alex reads the game very well and has lots of potential. He has a good rugby brain, makes good line breaks, has the right decision making skills and is a physical player as well. He has a young training age so we can make some further improvements to his physical conditioning.

“We got involved with Alex through Loughborough University, the GB students sevens team and then the GB7s Tour with England IPF so there has been some good development for him through the player pathway. We then took him to a FIRA-AER tournament in France recently and he performed well. There is definitely talent there and we have high hopes for him.”

Davis, who was born in Gloucester but grew up in Bristol, has played for Loughborough Students over the last four years. He played for London Welsh at the World Cup Tens last month in Singapore and will be part of the GB Students sevens team to compete in Brazil at the World University Championships in August.

Last season he was selected to play in the Barbarians match against Combined Services in Plymouth.

“I am really excited to be signing my first professional contract with England Sevens. It’s always been a dream of mine to play for England.

“I really enjoyed my time at Loughborough and it was the ideal place for my development with its brilliant support and fantastic professional outlook. Having just graduated I was looking for my next challenge and this presents a massive opportunity for me to test myself against the very best sevens players in the world.

“My family have been a massive support for me throughout my life and always encouraged me to stay grounded. I am extremely grateful and honoured to be given this chance to represent England.”

"We are extremely proud that Alex has gained a professional contract with England Sevens. Alex's devastating attacking play and fearless defence has been crucial to Loughborough Students’ recent success in RFU National 1.

“He has developed a real mental robustness, delivering big performances under pressure. He is thought of very highly by fellow players and staff and I'm sure his personality will be suited to the Sevens environment.

It also was announced that England have been nominated by the British Unions as the lead nation to attempt to qualify, on behalf of Team GB, for the sevens competition at the Rio 2016 Olympic Games.

For Team GB to qualify in the first qualification phase, England would be required to finish in the top four of the 2014/15 HSBC Sevens World Series.

Ahead of the tournament in Australia the England team will take part in the third leg of the FIRA-AER Grand Prix 7s Series in Manchester over the weekend of 13-14 September before the competition concludes in Bucharest on 20-21 September.