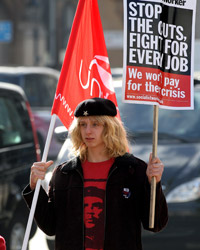 A new report looking at trade union representation in both union and non union British workplaces has found that the number of representatives has remained broadly stable over the recent recession.

The report, commissioned by workplace experts, Acas, and conducted by Professor Andy Charlwood and David Angrave in Loughborough University’s School of Business and Economics, analysed the Workplace Employment Relations Study to review worker representation between 2004 and 2011.

“However, there has been some significant change too, not least in the manufacturing sector which has seen a dramatic 40 per cent drop in the presence of representatives. To an extent this is balanced out by an increased number of union representatives in the public sector. This is against a backdrop of union recognition and membership levels remaining broadly stable since 2004.”

The report also found that:

The study warns that the overall stability in numbers masks considerable differences between sectors and representation increases in the public sector may point to growing disquiet amongst staff. The introduction of statutory rights for workers to be consulted about changes to the organisations they work for (the ICE regulations) does not appear to be associated with an increase in non-union worker representation but it has meant better communication between management and employees.

Professor Charlwood said: “The latest figures demonstrate a long term shift in the types of workers unions represent, from manufacturing and the private sector to the public sector.

“The increase in the number of trade union representatives in the public sector is likely to be in a direct response to the recession, as workers experience increasing grievances relating to pay, redundancies, pension cuts and restructuring.

“Where organisations have systems of worker representation in place, we have seen more frequent meetings between representatives and managers and an increase in the range of issues representatives receive information on, as well as greater resources to carry out their representative role.”

Worker representation in Great Britain 2004 – 2011: An analysis is available from www.acas.org.uk/researchpapers