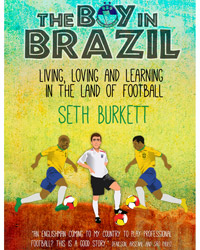 With less than 60 days to go to the start of the 2014 FIFA World Cup, a Loughborough University student has published a book about his unique experiences as a football player in Brazil.

Seth Burkett, who is currently studying for a Masters degree in English after graduating in Sports Science and English, has written the book titled The Boy in Brazil: living, loving and learning in the land of football.

Seth’s story began in the summer of 2009 when his youth team AFC Stamford were invited to play in a football tournament in the Brazilian city Salvador.  Seth explains:

“Our first match in the tournament was against the Brazil under-17 national team, who had Liverpool’s Philippe Coutinho playing for them.  Not surprisingly we lost 8-0.

“Unfortunately as I was 18 I was too old to play in the match.  So to make up for this it was arranged for me to train with a team called Vitoria who played in Serie A, the top flight of the National Football League in Brazil.

“After a few training sessions their coach said ‘I like the look of you, and I need a left-back for tomorrow’s match’ because his regular defender had been called up by Brazil.”

Through this match exposure Seth was spotted by another coach who offered him the opportunity to join Sorriso Esporte Clube, a team that played in the Mato Grosso League in the Brazilian State Championships.

Representing Sorriso in the televised Copa São Paulo de Futebol Júnior tournament generated huge media interest in Seth, and his club, for being the only English footballer to be playing professionally in Brazil.  Seth explains:

“In Brazil they love England, for being the country that invented football.  So to have me playing over there in their State Championship turned me into a media celebrity and I was being interviewed three times a day.”

Seth’s book charts his unique experiences throughout his season spent with Sorriso, including the kindness shown to him by his team-mates. The book also explores deeper issues including racism, bureaucracy and corruption.

The Boy in Brazil has been published by Floodlit Dreams, a new venture set up by renowned football journalist and writer Ian Ridley.  Seth explains:

“I had kept a diary in Brazil, and after finishing my degree I started to write up the book.  I initially received a number of rejections but I knew with the World Cup being played in Brazil this year I should give it another go.

“So I sent it off again and received interest from Ian Ridley. I really respect him as a writer, and when he said he was interested he was the only option for me.”

"I was intrigued by Seth's story and felt it deserved a wider audience. I was also impressed by his initiative in both going out to Brazil and in writing the book. He just needed a break, as do many young people these days, and being fortunate enough to be in a position to offer that through Floodlit Dreams, I was delighted to help."

Since returning back to the UK Seth has been a full-time student at Loughborough University.

Despite a serious injury in his second year, he has continued to play football, and has made a name for himself in futsal, playing for Loughborough Students in the National League and receiving a call-up to the England squad. Seth explains:

“The skills that were emphasised in Brazil - being comfortable under pressure, using the sole of the foot, and creativity in possession - are all vital components in futsal.

“My experiences in Sorriso have allowed me to thrive in the sport, which I first picked up playing for Loughborough Students. My continued involvement in futsal is a constant reminder of the incredible experiences of playing in Brazil.”

The Boy in Brazil is now available from booksellers. Seth will be signing copies at the FA National Futsal League fixture between Loughborough Students v FC Baltic United, being held in the Sir David Wallace Sports Hall on the evening of Sunday 4th May.