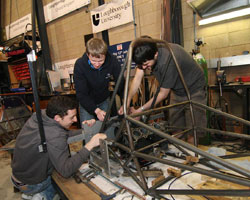 A group of students from Loughborough University are aiming to be the top UK team in the world’s biggest student motorsport competition at Silverstone this summer.

The team, led by final year under-graduate Thomas Childs, are using front and rear wings on their car for the first time and hope that will boost their chances of doing well in Formula Student UK from July 9-13.

The competition – run by the Institution of Mechanical Engineers - challenges student engineers to design, build and race a single seat racing car in one year.

The cars are judged on their speed, acceleration, handling, energy efficiency and endurance in a series of time-trial races, while the teams are tested on their design, costing and business presentation skills.

Points are awarded for eight challenges, adding up to 1,000. The endurance and sprint time-trials account for 500.

Loughborough have been competing in Formula Student, which is a global series of events, since 2003 and their best finish was seventh in Austria in 2010.

Thomas, 23, from Huntingdon, admits Loughborough will find it tough to win but he is hopeful that this year’s car will be the best since he started five years ago and the team are aiming to beat the UKs finest.

He said: “I’d like to think it will be the best. The big thing for us is this is the first year we are going to be using aerodynamic aids, we will have front and rear wings.

“A lot of the bigger-budget teams have been using them for the last five or six years and we are amongst the first of the UK teams to use them. It’s tough to make wings work hard at the low speeds we achieve, but necessary in order to keep up with the competition.

“Our aim has always been to be the top UK team, and we have been that close that many times. Mainly it’s reliability issues that have let us down.”

Like last year when they were on target for a good finish before a fuel-injection  problem during the 22km endurance race cost them dear.

Thomas said: “That was a bit of a kick for us because, given the pace we were at during the endurance, we would have scored enough points to finish eighth overall, which would have been phenomenal for us.”

Many of this year’s Loughborough group will be hoping to follow in the footsteps of three of last year’s team who secured jobs with Mercedes AMG F1. Others have had placements with the likes of Red Bull Racing, Williams and Mercedes HPP.

Scot Layton, a lecturer in the Aeronautical and Automotive Engineering Department and the project’s Faculty Advisor, said Formula Student was vital for people targeting a career in Formula One.

He added: “It’s about opportunity, the opportunity to showcase what they can do, to make themselves rounded engineers, to work with real business and with real professionals in the industry.”

Thomas, who is in the final year of an Automotive Masters degree, says many of the current team will be aiming to break into motorsport.

Loughborough’s team, which is 25 strong, started work on the car at the start of the academic year and testing starts in June.

At Silverstone, they will be competing against 2,000 students from 114 teams, including 61 from UK universities – 14 more than last year.

Among those competing are last year’s winners, ETH Zurich, from Switzerland, and the top UK team, Huddersfield University, who came 15th overall.