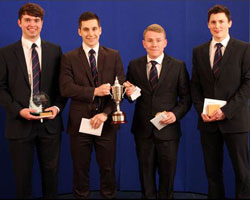 Four Loughborough University students have reached the world final of a competition aimed at finding the construction leaders of tomorrow.

The quartet, who are all in the final year of a course in Architectural Engineering and Design Management, will compete in the Chartered Institute of Building’s (CIOB) Global Student Challenge in Hong Kong on July 24-25.

Chris Jelfs, Jordan Evans, Robert Toon and Paul Malkin will be up against five other university teams, including Greenwich and Glasgow Caledonian from the UK, two from Hong Kong and one from Australia.

They qualified for the final from a worldwide entry of 24 and believe victory will boost Loughborough University’s standing in construction.

Chris said: “We are really thrilled to make the final and it would be out of this world if we win and really put a label on Loughborough.”

Jordan added: “It’s about representing Loughborough and saying to people that Loughborough is still up there, still producing good students.”

The four entered the inaugural Global Student Challenge after winning last year’s national final and being approached by a representative of the East Midlands branch of the CIOB.

They spent two evenings a week for six weeks preparing their submission for the competition, which utilises MERIT (Management Enterprise Risk Innovation and Teamwork) software developed at Loughborough and has been used to train young professionals since 1998.

Chris said: “The competition consists of six different software submissions on the simulation.

“So we were representing a make-believe company on the simulation, and enacting the directors of the company. We had to make decisions on the bidding for jobs, the labour allocation, employing project managers, financial  and marketing decisions etc.

“There was a huge array of variables that would impact this software and we were very lucky to press the right buttons at the right time.”

Dr Osmani said: “This is an outstanding achievement, which promotes and recognises excellence of students in the Architectural Engineering and Design Management Programme at Loughborough University.

“We are very proud of Jordan, Chris, Rob and Paul, and not just because of the accolades they have received from CIOB. What is most important is that they gained so much from the process, helping them to become future leaders in the construction industry.

“They are driven, confident, measured, eloquent, and role models and an inspiration to other students.”

The Global Student Challenge was launched last year with the aim of identifying and moulding future leaders of the construction industry.

Michael Brown, Deputy Chief Executive at the CIOB, said: “Global Student Challenge is a serious step change in the way we hope to develop talent.

“With research indicating there will be 70 per cent more construction work going on around the world by 2025, we believe that we need to take pertinent and innovative steps to nurture the talent to deliver on these estimations.”