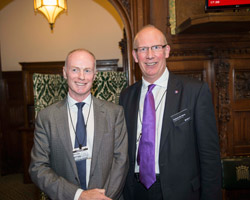 Distinguished guests from the UK and overseas gathered at the House of Commons in London on 7 April for a special event to celebrate the launch of Loughborough University’s new strategy.

Entitled ‘Building Excellence’, the strategy sets out the University’s ambitions for the next decade. At its heart lie four central themes which form the framework for Loughborough’s future direction of travel. They are:

−      Growing capacity and influence, and

Interwoven into each of these themes are the University’s core activities of research, teaching, enterprise and sport.

The strategy also outlines the ambitions the University has set itself. Within the next ten years Loughborough will:

Professor Robert Allison, Loughborough University’s Vice Chancellor, said: “Loughborough has made outstanding progress through the years. For instance, we have been awarded seven Queen’s Anniversary Prizes, an achievement bettered only by Oxford, and we have consolidated our position as the country’s premier university for sport.

“We have also announced plans to open a second academic campus, Loughborough University in London, on Queen Elizabeth Olympic Park, in 2015 to expand our academic provision and further our world-leading research and innovation.

“Our new strategy will build on these successes and shape our development through the next decade.”

The celebrations at the launch event were given a special boost when it was announced that Jon Wood, an alumnus of the University, has given a £1 million donation to Loughborough, in support of the University’s strategy.

Mr Wood said: “I believe that Loughborough University has developed an outstanding proposition that will enhance the development of excellence in the UK for years to come. I wanted to show my support, as I believe the University has the potential to make a real difference to the lives of people right across the country and beyond.

“My donation is just the start of my commitment to Loughborough University, and I look forward to supporting Professor Robert Allison, and in particular Dr Peter Keen, Director of Sport, in this exciting new chapter, over the forthcoming years.”

The Vice Chancellor commented: “We are incredibly grateful for Jon’s extremely generous support, which will enable us to take a significant step forward in our future journey.”